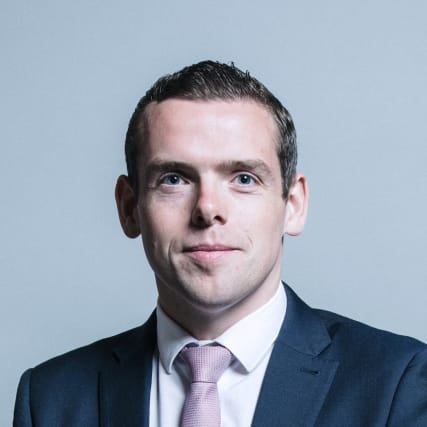 Douglas Ross has said Downing Street and Dominic Cummings were not involved in his decision to run for the Scottish Conservative leadership.

The Moray MP confirmed on Friday that he is running for the party’s top job, following Jackson Carlaw’s surprise decision to stand down the previous day.

Ruth Davidson, who resigned as the Scottish Tory leader last August, could now be poised for a return to frontline politics as Mr Ross hopes she will front the party at First Minister’s Questions.

Mr Ross said he will contest a seat at the next Holyrood election in May if he wins the party leadership, though he will also continue as the MP for Moray.

Speaking to the PA news agency, Mr Ross said he had been urged by colleagues to run for the leadership.

He said Downing Street and Number 10 aide Mr Cummings were “absolutely not” involved in his decision to stand.

Discussing Mr Carlaw, he said: “I think Jackson made a very honest and very brave appraisal of his leadership. He’s someone who has served this party extremely well for four decades.”

Speaking of his own plans for the leadership, he added: “I believe as someone who has been a councillor, an MP and an MSP, I can take the fight to the SNP, which we need more of, and also present a positive vision of the party to the country in next May’s election.”

Mr Ross said he will stay on as an MP, and will also continue in his role as a football referee – which he described as a “hobby that I do at the weekends.”

He said: “It’s something that I find a great relief from the often stressful world of politics.

“While some politicians enjoy sitting down, relaxing, reading a book or going for a walk, I enjoy running around for 90 minutes officiating matches across Scotland.”

He said there is precedent for an MSP to also sit as an MP, giving Alex Salmond as an example.

Asked about recent polls which indicated the SNP is on course to win at majority in next year’s Holyrood vote, he said: “I’m absolutely in this to be first minister. No-one should enter any race for an election if they don’t think they can win.

“I know the challenge we face. No-one can be complacent with the polls, they can go down as quickly as they go up.

“So yes, we have a challenge but we have a fighting chance if we can get a leader in place quickly to take the strong, positive Scottish Conservative and Unionist message to people in every part of Scotland. ”

On Ms Davidson stepping forward from the backbenches to once again take on Nicola Sturgeon at FMQs, Mr Ross said: “We need someone who’s been there, done that and has a proven track record.

“I can’t think of anyone better than Ruth to take the fight to Nicola Sturgeon, as she has done for many years as leader.

“She’s taken the decision to step back into the front line of politics until Parliament rises for the next election.”

He also reflected on previous comments he made that he would want “tougher enforcement against Gypsy Travellers”, if he was prime minister for a day.

Mr Ross said: “Any politician that doesn’t reflect on what they’ve said in the past and doesn’t accept they’ve made mistakes isn’t worth the job.

“I am someone that will make mistakes, has made mistakes, but I’ll learn from them.

“And I’ll be a better politician for the people of Scotland as a result of that.”

Mr Ross resigned as a Scotland Office minister in May over Mr Cummings’s efforts to defend his trip from London to Durham during the coronavirus lockdown.

Prime Minister Boris Johnson paid tribute to Mr Carlaw after he announced his resignation on Thursday, describing him as a “fantastic servant” to the party, but there has been speculation the Eastwood MSP was pushed out of the job.

Michelle Ballantyne, the Tory MSP for the South Scotland region who stood against Mr Carlaw in the leadership contest, said the party “did make a bad choice” in appointing him as leader, and she suggested he had been removed in a “stitch up”.

But fellow party MSP Adam Tomkins, who is to quit Holyrood at the 2021 election, told the BBC’s Good Morning Scotland radio programme: “Michelle doesn’t know what she’s talking about.

“The only thing that we need to remember about Michelle is that she was beaten 75/25 in a two-horse race by Jackson Carlaw only a few months ago and I’m afraid that Michelle doesn’t speak for the party.”