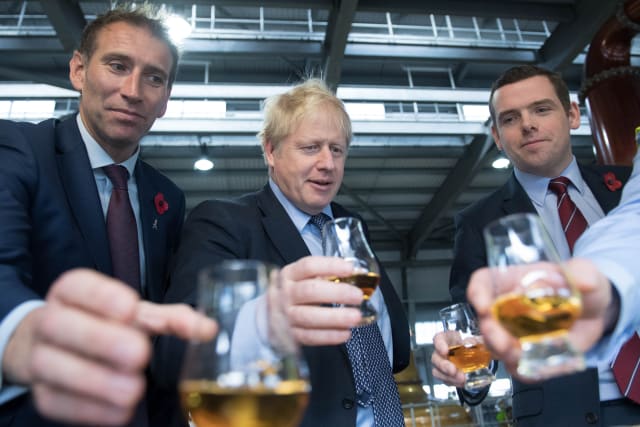 MP Douglas Ross has confirmed he is running to be the next leader of the Scottish Conservatives, insisting he is the person who can beat the SNP.

The former UK Government minister said at a “crucial time” in politics, he can unite the party after it lost its second leader in less than a year.

Jackson Carlaw resigned as Scottish Conservative leader on Thursday, less than six months after being voted into the job.

Ruth Davidson, who resigned as the Scottish Tory leader last August, could now be poised for a surprise return to frontline politics.

Mr Ross confirmed that if he becomes the party’s next leader, Ms Davidson will take on Nicola Sturgeon at First Minister’s Questions until he wins a seat in the Scottish Parliament.

He said he will contest a seat in the Holyrood election in May if he becomes the party leader.

He has previously served as an MSP, but quit the Scottish Parliament for Westminster after ousting then SNP depute leader Angus Robertson in the 2017 general election.

Mr Ross said: “This is a crucial time in Scottish politics. We are months away from an important election and need strong, decisive leadership of our party to take on and defeat the SNP in seats right across the country.

“My message to voters across Scotland will be this: if you want to build a better Scotland, if you want to beat the SNP, and if you want to put the divisions of the past few years behind us, the party I plan to lead is one you can unite behind, and one that can win.”

The SNP is bidding to win a record fourth victory in next year’s election, and hoping for a majority to increase pressure for a second independence referendum,

Mr Ross said ensuring Scotland remains an “integral part of the United Kingdom” will his priority.

He said: “I want us to show clearly to everyone in Scotland, no matter where they live or who they are, that if they want to move on from the divisions of the past and focus on the issues that really matter – a strong economy, good schools, safe streets and a world-leading NHS – then the Scottish Conservatives will be their voice.

“Scotland is an integral part of the United Kingdom and that’s a relationship I want to maintain and improve. Under my leadership, this will be an absolute priority.”

Prime Minister Boris Johnson paid tribute to Mr Carlaw after he announced his resignation on Thursday, describing him as a “fantastic servant” to the party, but there has been speculation the Eastwood MSP was pushed out of the job.

Michelle Ballantyne, the Tory MSP for the South Scotland region who stood against Mr Carlaw in the leadership contest, said the party “did make a bad choice” in appointing him as leader, and she suggested he had been removed in a “stitch up”.

But fellow party MSP Adam Tomkins, who is to quit Holyrood at the 2021 election, told the BBC’s Good Morning Scotland radio programme: “Michelle doesn’t know what she’s talking about.

“The only thing that we need to remember about Michelle is that she was beaten 75/25 in a two-horse race by Jackson Carlaw only a few months ago and I’m afraid that Michelle doesn’t speak for the party.

“I think the reason why we’re worried about the polls is because we think that they might be right for the first time in Scottish history.

“Independence now looks like it might not be the minority pursuit that it’s always been but the position of a majority of Scots and we need to do something about that.

“I think Douglas is exactly that kind of combination of formidable and robust and determined that we do need… I think he will be an outstanding candidate and an outstanding leader.”

Mr Ross resigned as a Scotland Office minister in May over Dominic Cummings’s efforts to defend his trip from London to Durham during the coronavirus lockdown.