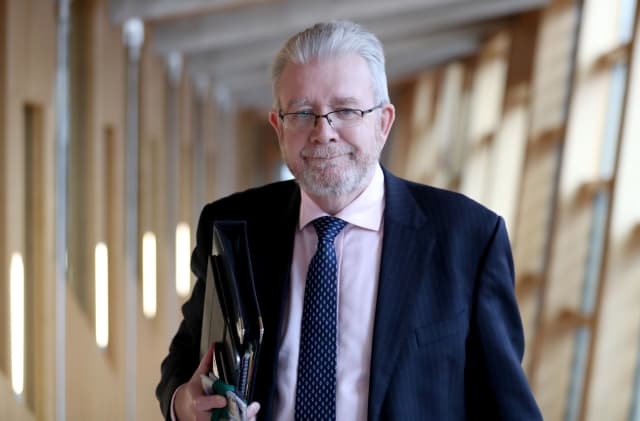 The Scottish Government has pledged to fight “tooth and nail” against Westminster plans it has branded a “blatant power grab”.

Scottish Constitution Secretary Mike Russell made a statement to Holyrood on Thursday, vowing to oppose the UK Government’s proposals to establish a new internal market between the four nations at the end of the Brexit transition period.

The Tories criticised Mr Russell’s “hysterical and misleading rhetoric” and said creating an internal market is necessary to allow firms in Scotland to do business in other parts of the UK.

But the Constitution Secretary said: “Every single power that the Scottish Parliament has can be undermined and taken away by these proposals.

Powers over food labelling, food manufacturing and hygiene, animal welfare, recycling and environmental matter could all be affected, he said.

Mr Russell argued the impact of the proposals in the UK Government’s Internal Market Bill will mean Westminster – and not Holyrood – will determine the standards of goods and services produced in Scotland.

He said: “What the UK Government wants is not smooth trade but to take back control – and not just from the EU but from the people of Scotland and Wales and Northern Ireland.

“And it certainly does not want anything to stand in its way as it wilfully dismantles the high quality system of regulation and protection we inherit from our years in the EU.”

He claimed there is “no commitment” in the proposals for the UK Government to seek the consent of Holyrood for the changes.

But Mr Russell said the legislation requires the express consent of MSPs, adding: “The Scottish Government will be recommending in the strongest possible terms that this Parliament does not give any such consent.”

He added: “The Scottish Government is committed to co-operation but it will not be bullied.

“There are alternatives to these ill-conceived proposals, including taking the voluntary common frameworks programme to its anticipated conclusion.”

He told the Scottish Parliament: “It is not too late for the UK to turn back from this route.

“But I can assure Scotland that if it does not then this Government will fight the proposals tooth and nail, in every possible place, and with no intention of giving way.”

He said: “The UK internal market is vital for Scottish business and the economy, supporting over half a million jobs.

“Scottish producers need to be able to sell to our largest market place – the rest of the UK – without restriction or barriers or trade.

“Sadly this Government doesn’t seem to understand that simple point.

“They would rather engage in constitutional grievance mongering than consider what is best for jobs.”

Scotland Office minister Iain Stewart said: “The UK Government is taking action to protect jobs, businesses and consumers in every part of the country.

“The UK internal market is vital for Scottish businesses and Scottish jobs – 60% of Scottish trade is with the rest of the UK, worth more than £50 billion to Scotland. We must protect that.”

He added: “The UK Government has been clear it will not sign a trade deal that will compromise our high environmental protection, animal welfare and food safety standards.

“Our proposals respect and strengthen devolution, with scores of powers returning from the EU, going straight to Holyrood.”