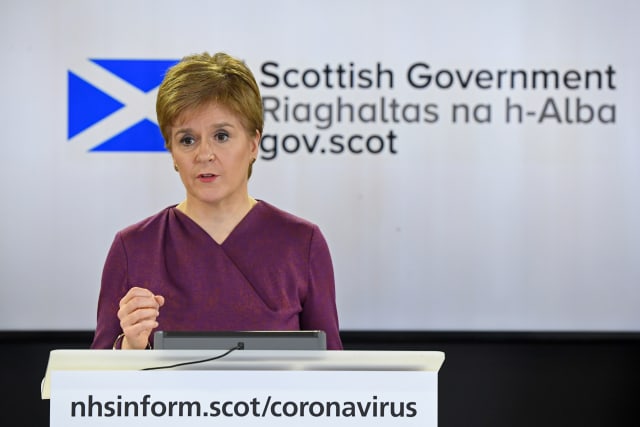 Nicola Sturgeon has been ranked fifth in a new list of the world’s most eloquent leaders.

Scotland’s First Minister was described as being “clear, calm and compassionate” by the experts who drew up the list.

It was topped by New Zealand Prime Minister Jacinda Ardern, who was praised for her “empathetic leadership style”.

Professional development coaches from the Development Academy wing of Acuity Training compiled the list after reviewing more than 100 hours of footage from press conferences, speeches and other public addresses throughout 2020.

Three of the leaders named in the top five are women – with German Chancellor Angela Merkel named as the second most eloquent leader, ahead of Indian Prime Minister Narendra Modi in third place and Canada’s Justin Trudeau, who was ranked fourth.

Ms Ardern “challenges the common perception that emotional communication shows weakness, instead choosing to approach the public with softer touch”, the experts said.

They added: “She has a measured and authoritative sincerity about her – she is kind and compassionate, without shying away from tough issues.”

Speaking about Scotland’s First Minister they said: “Nicola Sturgeon has received a lot of praise for her response to the coronavirus pandemic – and it’s not hard to see why.

“She is clear, calm and compassionate, is not afraid to be tough or emotional, and she has a great sense of humour.

“There’s no sense of performance with Sturgeon – she is very real.”

Former US President Barack Obama was named as the most effective communicator of the last decade.

His successor Donald Trump was criticised by the experts, who said: “His overuse of metaphors and analogies is confusing for many and he occasionally slurs on words.”

They described Prime Minister Boris Johnson as a “very unique public speaker”, saying: “Unlike many of his colleagues, the former foreign secretary and mayor of London has had a tendency to forgo pauses in favour of muttering or waffling, and his use of odd or obscure references often left people confused about his message.”

But they added: “In recent months, however, the Prime Minister has made some real improvements to his communication and presentation skills, for example, he doesn’t stumble over his words as often.”

Development Academy director Ben Richardson said: “World leaders have the ability to inspire us, motivate us, shock us and even scare us – there is tremendous power in great public speaking, and 2020 has certainly provided our heads of state with some serious talking points.

“But despite the requirement to make several public appearances and speeches in their roles, there are some world leaders who aren’t always on the right track when it comes to addressing their nation.

“We decided to analyse the communication and presentation skills of leaders from around the world to determine the list and it’s great to see so many female leaders featuring on it.”

He added: “Jacinda Ardern for example, is a sincere and compassionate speaker, while Nicola Sturgeon is very engaging while demonstrating empathy.”

“There are some fantastic – and not so fantastic – examples of public speakers from this research and it’s fascinating that although there are only around 10% of women in leadership roles worldwide, female leaders make up 50% of the top communicators.”