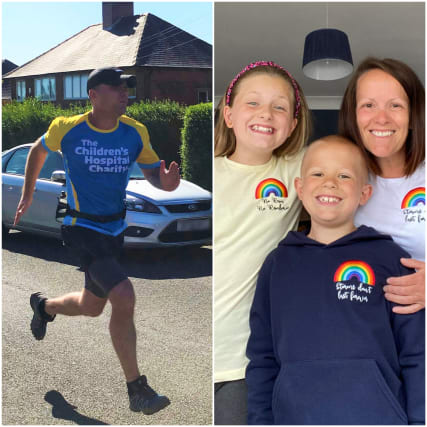 A father who was inspired by a young boy with leukaemia to run a half marathon every day for a month has said the charity challenge is “beyond anything” he has ever done.

Tom Cotterill, 32, from Chesterfield, was motivated to take on the 400-mile fundraising effort after he saw a Facebook post about eight-year-old Jude Hawkridge – who is raising money for the cancer and leukaemia ward at Sheffield Children’s Hospital, where he is receiving treatment.

Mr Cotterill, who took up running as a way of raising awareness after the stillbirth of his daughter Taryn in 2016, has run 13.1 miles at 5am every day since July 1 and will have completed a massive 406.1 miles when he finishes the challenge on Friday.

He has never met Jude or his family, who are from Rotherham, but, after reading about the youngster, who is being treated for acute lymphoblastic leukaemia – a rare cancer that stops the bone marrow from making healthy white blood cells – he decided to support his cause.

Mr Cotterill, who also has a nine-year-old daughter and a two-year-old son, said: “Jude and his family are doing such an awesome job at raising money for Sheffield Children’s Hospital and I thought they might like a little more help.

“The family have said that the care they receive is outstanding, but Jude resolved shortly after coming home that the ward needed support.

“The importance of an environment that is comfortable, pleasant and practical cannot be placed into words and Jude’s an amazing young man on his own personal quest to make a difference for other children and families.”

Mr Cotterill said that, although he has run marathons in the past, the duration of this challenge is beyond anything he has undertaken before.

He said: “I have had short periods of running since I was a teenager but, after my daughter Taryn was born sleeping in 2016, running became a way of raising awareness.

“Now, when I run, I feel like Taryn is by my side, taking on new challenges and helping as many people and great charities as we can.

“As most people are aware, the coronavirus has meant many organised sporting events have been cancelled. However, this got me thinking and I felt it was time to increase my game and test myself both physically and mentally.”

The cancer and leukaemia ward at Sheffield Children’s Hospital provides treatment for cancer and blood disorders in children, from babies through to 19-year-olds, from South Yorkshire, Lincolnshire and Derbyshire.

It also sees patients from across the UK for treatment and surgeries, including bone marrow transplants.

The Children’s Hospital Charity’s £2.75 million appeal will expand the ward, with more space for treatment and play, a separate adolescent area, and additional bed space, including single bedrooms and en-suite facilities.

– Donations can be made at www.justgiving.com/fundraising/tom-cotterill5