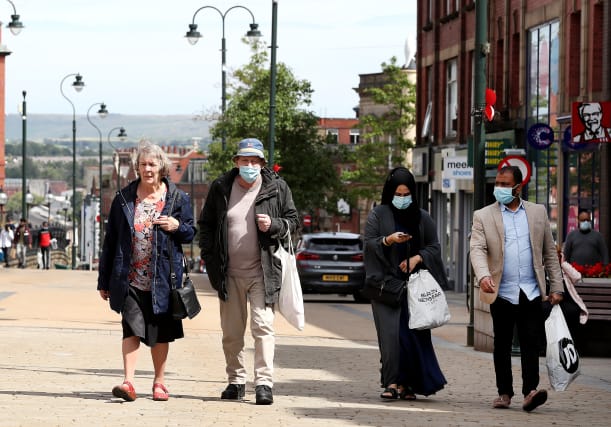 Local MPs have urged the Government to provide clarity over new restrictions imposed on towns in the north of England due to rising coronavirus cases.

The stricter lockdown measures mean members of different households will not be able to meet indoors from midnight tonight.

Mr Hancock said the restrictions would cover the whole of Greater Manchester, as well as the east Lancashire boroughs of Blackburn with Darwen, Burnley, Pendle, Rossendale and Hyndburn.

Shadow foreign secretary Lisa Nandy, who is Labour MP for Wigan, said she had been told that the restrictions were not limited to indoor spaces.

“Told tonight this applies to homes AND gardens but you can still visit public spaces where social distancing measures are in place,” she tweeted.

“People will have a lot of questions and we are pressing for more information quickly.

“It is really hard but please follow advice and stay safe.”

Holly Lynch, Labour MP for Halifax and shadow immigration minister, said she was “disappointed” at the lack of information.

“I appreciate people will be apprehensive tonight about the renewed lockdown measures across Calderdale and other parts of the country,” she said.

“I am disappointed to say that like you, I have had no further detail at all from Government, but let’s make this work and stay safe.”

Jim McMahon, Labour MP for Oldham West & Royton, tweeted: “On the face of it, for Oldham borough residents this is the same restriction announced already this week, replicated in further areas.

“As well as publishing a list, I’m sure all of us would welcome the Government adding what more they will do to support us, jobs and our economy.”

Lucy Powell, Labour MP for Manchester Central, said the news had led to “many questions”.

“My understanding is that this is a precautionary measure to stop people going to other households,” she said.

“It doesn’t affect other activities like travel, childcare, going to work, hairdressers etc.”

Despite the confusion, some supported the Government decision.

Mayor of Greater Manchester Andy Burnham urged locals to remain “vigilant” and protect one another.

“Over recent days, there has been a marked change in the picture across Greater Manchester with regard to the spread of Covid-19,” he said.

“We have always said that we will remain vigilant and be ready to respond quickly should the need arise.

“In line with that approach, I have agreed with the Health Secretary that it is right to act on the precautionary principle and introduce modest measures now to bring down the rate of new infections.

“I ask all Greater Manchester residents – young and old alike – to protect each other by observing these new requirements.

“This is a place which prides itself on looking out for each other. We now need to be true to that by not acting selfishly and keeping the health of others in mind at all times.”

First Minister of Scotland Nicola Sturgeon also backed the Government’s decision, tweeting: “The UK government is right to act quickly if they think the situation warrants it.

“But this is a sharp reminder that the threat of this virus is still very real. Please abide by the all #FACTS advice and stay safe.”