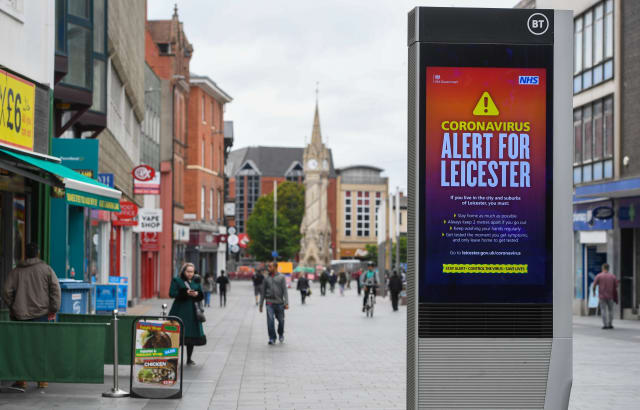 The ban on different households meeting indoors in parts of northern England is the latest response to problems raised in the recovery from the Covid-19 pandemic.

As measures have been slowly eased in the 18 weeks since, there have been several bumps in the road as the Government navigates a return to as normal a society as possible.

These have included local lockdowns and areas of concern following the easing of the measures, as well as fears of a second wave in Europe.

People from different households in Greater Manchester, parts of East Lancashire and West Yorkshire will be banned from meeting each other indoors from Friday, Health Secretary Matt Hancock announced late on Thursday.

Mr Hancock said “households gathering and not abiding by the social distancing rules” was a reason for the stricter rules and it was in order to “keep the country safe”.

It comes after the first local lockdown was implemented on June 29 in Leicester following a spike of Covid-19 infections in the city.

Mr Hancock previously said a range of targeted interventions in Leicester had failed in the days prior to the decision to lock the city down for several weeks.

The new measures in the north of England come amid fears of rising rates of the virus in the UK and the possibility of a second wave.

Government data showed the seven-day average of new cases in the UK had increased to just over 700 compared to around 550 in the second week of July.

However, the figure remained far lower than at the start of May when the average was close to 5,000.

Niall Dickson, chief executive of the NHS Confederation, previously said that the combination of a spike of cases with “exhausted staff” while the NHS tries to rebuild services could prove “challenging”.

Advice on self-isolation has also changed since the start of lockdown, increasing the period from seven days in isolation to 10 days.

The chief medical officers for England, Wales, Scotland and Northern Ireland have since said that it is “now the correct balance of risk” to extend the isolation period for those who test positive or have symptoms to 10 days.

Mr Hancock has also warned that a new spike in Covid-19 cases is “clearly” beginning to emerge in Europe as he said “we’ve got to do everything” to prevent it reaching the UK.

“I am worried about a second wave. I think you can see a second wave starting to roll across Europe and we’ve got to do everything we can to prevent it from reaching these shores and to tackle it,” Mr Hancock told Sky News.

He said the 10-day isolation measure was “part of that, but so, too, are the measures we’re taking, for instance, to ensure that we don’t directly bring cases back to this country where there’s a big spike in cases”.

Fears of an increase in cases has led to changes in the Government’s overseas travel advice and quarantine requirements.

Travellers entering the UK from Luxembourg will have to quarantine for 14 days from midnight, the Government announced on Thursday, with the Foreign and Commonwealth Office now advising against “all but essential travel to Luxembourg”.

This comes after similar decision to remove the so-called “air bridge” travel corridor with Spain on Saturday night.

After strong reaction to the change in advice for Spain, the Prime Minister’s official spokesman said decisions on border measures and travel advice “can be changed rapidly if necessary to help stop the spread of the disease”, adding that no travel was risk-free.