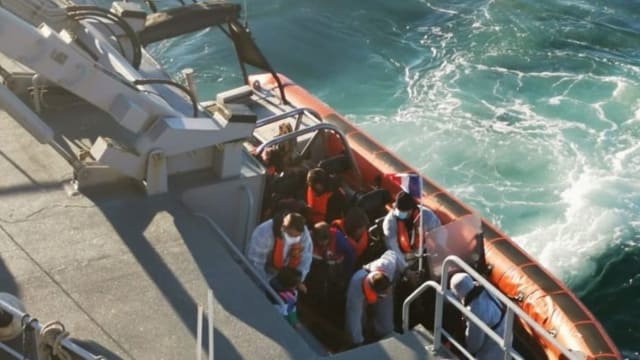 Five children were rescued from the English Channel on Thursday as a record number of migrants reached UK shores.

At least 202 migrants managed to cross to Britain on Thursday in a surge of 20 boats, the Home Office confirmed.

It is the second time in a month that a new high mark has been set for individuals arriving from Europe via the dangerous Channel route.

French authorities also intercepted at least 20 migrants whose boat was taking on water.

The Home Office said the number of crossings from the continent is "unacceptably high".

Charities say the new record is the result of "aggressive evictions" in Calais and called on the Government to establish safe and legal routes for migrants.

More than 1,000 migrants have successfully made the crossing in July alone, analysis by the PA news agency reveals.

Hundreds of migrants have been arriving in the UK in small boats every month, even with Britain being under coronavirus lockdown.

This is despite Home Secretary Priti Patel announcing a "new operational approach" to dealing with small boat crossings when she visited her French counterpart in Calais earlier this month.

All individuals picked up by Border Force were brought to Dover, where are they expected to have been assessed for symptoms of coronavirus.

The Home Office has repeatedly said coronavirus has had no impact on its ability to respond to migrant crossings.

Over in French waters, 18 migrants including five children were rescued from a boat that was taking on water off the coast of Escalles, near Calais on Thursday morning.

Some of those on board were find to be hypothermic and one migrant had to be put on oxygen on the way back to the port.

They were picked up by a French customs patrol ship and taken to Calais, with another two migrants rescued from a paddle boat en route.

Bella Sankey, director of charity Detention Action, said: "Today's record number of migrant crossings is a result of aggressive evictions in Calais combined with the UK Government's failure to provide safe and legal routes for those seeking sanctuary here.

"How much longer can Priti Patel pretend her strategy is working?

"We need a humane and realistic asylum policy which puts lives first and upholds our best traditions of justice."

Bridget Chapman, spokeswoman for Kent Refugee Action Network, said: "Everyone on those boats is a human being who deserves a chance to have safe and legal passage to make their claim.

"That would stop these crossings overnight and would mean we knew exactly who was arriving and when."

Minister for Immigration Compliance and the Courts Chris Philp said: "The number of illegal small boat crossings we are seeing from France is unacceptably high.

"France have stopped thousands of migrants this year and they stopped more today, but more needs to be done.

"We need stronger enforcement measures, including interceptions at sea and direct return of boats, and the French have heard that directly from the Home Secretary."