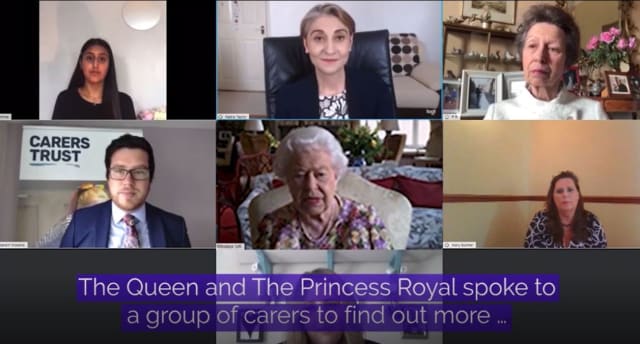 The Queen and the Princess Royal have shown that not even the royal family are immune to the technical difficulties that come with relying on video calls during lockdown.

On the monarch's first ever official on-screen conference call as part of her public duties, the Queen remarked how she could only see four of the six people taking part.

The footage features in an ITV documentary to mark Anne's forthcoming 70th birthday, and was revealed ahead of its broadcast on Wednesday evening.

As the engagement gets under way, one of the Queen's assistant private secretaries remarks off screen: "I'm just going to introduce Her Majesty the Queen."

After a delay of several seconds during which a blank screen with the letters WU – for Windsor UK – is the focal point, the head of state appears on camera.

Anne, who joined her mother on the call in June to celebrate Carers Week, says: "Good morning – at Windsor."

The Queen, speaking from the Oak Room in the Berkshire castle, replies: "Good morning. I'm very glad to have been able to join you."

Anne asks: "Can you see everybody? You should have six people on your screen."

But the Queen replies: "Yes. Well, I can see four anyway."

No-nonsense Anne, true to form, remarks with a smile: "OK ... actually you don't need me. You know what I look like."

Anne – the Queen and the Duke of Edinburgh's only daughter – turns 70 on August 15.

She was followed for more than a year by film-makers for the behind-the-scenes programme, which features unseen family footage and conversations with her children, Peter Phillips and Zara Tindall, and her husband, Vice Admiral Sir Tim Laurence.