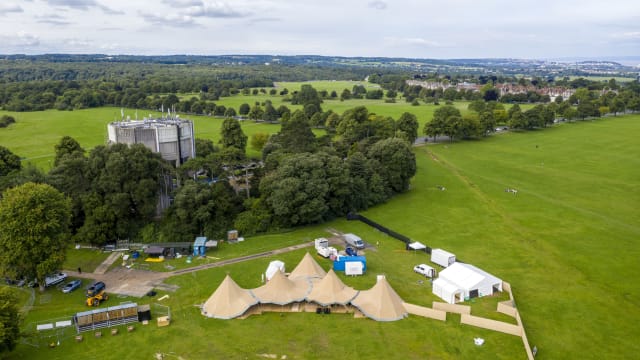 A teepee village has been erected in Bristol to provide a socially distanced dining and drinking space.

Each venue has 20 tables with adjustable dividers to enable people to book in numbers from two to six.

Within days of the site being announced, the vast majority of reservations had sold out.

The pop-up venture is a collaboration between Josh Eggleton, Team Love, Pasta Loco and The Pipe and Slippers.

It will initially create direct employment for 90 people, with the potential for more restaurants to join.

Michelin-starred chef Mr Eggleton said: “All of the venues involved are not open under their normal guise.

“We are closed because we are very small venues and we are unable to open up currently, so we are doing this to keep our businesses afloat, looking after our staff and families, the people that we work with.

“Breaking Bread is a co-operative of individual businesses in Bristol and we all have similar social values – we are all very minded to look after our community.

“We want people to realise they are contributing to something that is going to have a positive effect on our local economy.”

A proportion of profits raised from Breaking Bread will be placed into a central fund to assist community organisations and initiatives in the city.

Plans are also under way for a board to be appointed to oversee employment and training opportunities at the venue, with the aim of helping young people in Bristol.