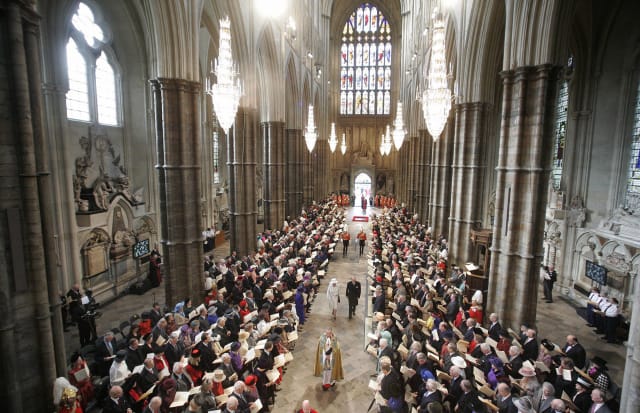 Westminster Abbey is calling on people who have never been inside the church and only seen it on television to visit for the first time.

In a Twitter poll, the Abbey found that more than a quarter of its followers who responded had not explored the historic landmark in person.

The gothic Abbey in central London has been the scene of some of the most memorable royal occasions, from the wedding of the Duke and Duchess of Cambridge to the coronation of the Queen and the funeral of Diana, Princess of Wales.

It was also where the Duke and Duchess of Sussex carried out their final official public duty before quitting as senior royals – and where Kate was accused of snubbing Meghan during the service, according to a new royal biography.

Members of the public are being urged to explore the Abbey at a unique time in history, when there are fewer crowds and they will almost have the church to themselves.

Scott Craddock, head of the Abbey’s visitor experience, said: “We were surprised to hear that many people have only ever seen the Abbey on television.

“We are a nation which loves to travel and enjoys sightseeing in Europe’s great cities, but many of us have never seen the historic attractions on our doorstep.

“It’s a brilliant time at the moment to visit places closer to home because there are fewer crowds and queues – you really will have the place to yourself.”

Some 26% of those who responded to the poll by the Abbey when asked “When were you last here?” said they had only ever seen the church on television.

The Abbey, which is set to lose £12 million in revenue this year and could make some of its staff redundant as a result of the pandemic, has 30% off ticket prices on Wednesday evenings to tempt people back in to London, with an adult ticket costing £12 for the mid week slot.

The church was shut for four months because of the coronavirus outbreak.

Steeped in more than a thousand years of history, the Abbey has been at the forefront of major royal ceremonies for generation after generation.

The Queen, as Princess Elizabeth, married the Duke of Edinburgh there. It is also the final resting place of 17 monarchs – among them Charles II and Elizabeth I.

The Abbey has been the coronation church since 1066, and the Queen’s was the 38th.

More than 3,300 people are buried there and many others commemorated.

They include the theoretical physicist Professor Stephen Hawking, whose gravestone is carved with the equation for Hawking radiation and the English translation of a phrase which features in Latin on Sir Isaac Newton’s gravestone: “Here lies what was mortal of Stephen Hawking 1942-2018”.

– The Abbey is open for visiting on Saturdays from 10am to 2pm and on Wednesdays from 4.30 pm to 7pm, with timed entry tickets available through advance booking online at www.westminster-abbey.org/visit-us.