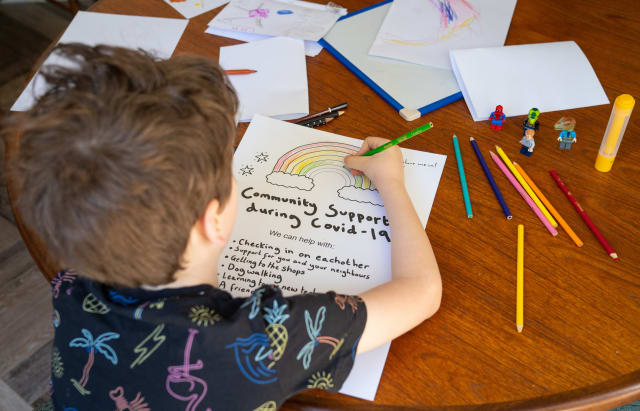 Mothers are more likely to have sacrificed their work to carry out home-schooling and developmental activities with their children during the Covid-19 lockdown, research suggests.

Average hours worked fell by around 40% in lockdown, according to a UCL study, and mothers with younger children at home were significantly more likely to have stopped work than fathers.

The researchers warned that families’ finances will become “very precarious” if employment does not rebound when the Government’s relief schemes end over the upcoming months.

Nurseries, schools and colleges across England closed their doors to the majority of pupils in March, which means some pupils will have been out of the classroom for nearly six months when they return in September.

The study found that among parents of school-aged children, 58% reported doing some home-schooling on a typical weekday, with 64% of mothers and 49% of fathers.

Among parents of primary school children, mothers were spending an average of five hours per day on home schooling, while fathers spent two hours, according to the research.

Mothers were also spending nearly three and a half hours on developmental activities with primary school-aged children on a typical day, compared with just under two hours for fathers.

These differences were also reflected in stopping work. Mothers, especially those with children of primary school age or younger, were considerably more likely than fathers to have ceased work responsibilities.

The research, based on a survey of more than 18,000 people in May, also found that better educated parents and those who stopped working were more likely to spend time on home-schooling.

Parents who continued to work through the lockdown spent 1.2 fewer hours on home-schooling per day than those who were not working, the study found.

Co-author Professor Emla Fitzsimons, from the UCL Institute of Education, said: “Many mothers who have put their careers on hold to provide educational support for their children will need to adjust again once schools reopen and the furlough scheme tapers off.

“And with educational inequalities between advantaged and disadvantaged children potentially growing during this period, policymakers and practitioners will have to be vigilant to ensure that those who have suffered the most learning losses are well supported when schools return.”

The study also found that across all age groups, nearly 30% of people reported being financially worse off since the start of the pandemic.

Among men in their late teens who had been working, 62% stopped work completely in the lockdown, compared with 44% of those in their early 60s and 30% of men aged 50.

The changes to financial circumstances appear to have “widened inequality”, the report said, as people who said they were “struggling” before lockdown were most likely to say they were worse off.

Co-author Professor Francis Green said: “The worst effects have been avoided for many families by the Government’s furlough scheme, and some have saved on commuting and leisure expenses.

“But those who were struggling before the pandemic were most likely to have come into greater difficulties. With relief schemes being tapered off in August and September, the future for families’ finances is about to become very precarious.”