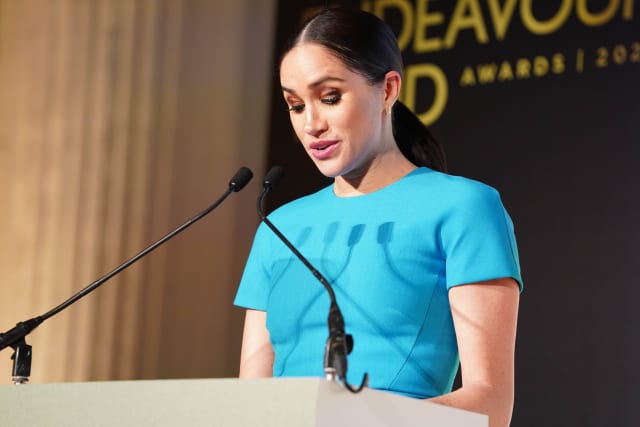 The Duchess of Sussex is awaiting a High Court ruling on a bid to keep secret the identities of five friends who gave an anonymous interview to a US magazine in her legal action against a British newspaper.

In her legal battle against the publisher of the Mail on Sunday (MoS) and MailOnline, Meghan’s lawyers have applied for the five friends who gave an interview to People magazine to remain anonymous.

The duchess is suing Associated Newspapers Limited (ANL) over an article which reproduced parts of a handwritten letter sent by her to Thomas Markle, 76, in August 2018.

In an article published by People in February of last year, the friends spoke out against the bullying Meghan said she has faced, and have only been identified in confidential court documents.

The duchess, 38, says her friends gave the interview without her knowledge, and denies a claim made by ANL that she “caused or permitted” the People article to be published.

Her legal team attended the High Court in London on Wednesday for a preliminary hearing before Mr Justice Warby in a bid to keep the identities of the friends secret.

Lawyers for ANL are resisting the application, claiming the duchess’s friends brought the letter sent by her father into the public domain when it was referred to for the first time in the People interview.

In court documents for the hearing, Meghan’s lawyers argued that the friends – referred to as A to E – have a right to anonymity both as confidential journalistic sources and under their own privacy rights.

Justin Rushbrooke QC, representing the duchess, said in written submissions to the court: “To force the claimant, as the defendant urges this court to do, to disclose their identities to the public at this stage would be to exact an unacceptably high price for pursuing her claim for invasion of privacy against the defendant in respect of its disclosure of the letter.

“On her case, which will be tried in due course, the defendant has been guilty of a flagrant and unjustified intrusion into her private and family life.

“Given the close factual nexus between the letter and the events leading up to the defendant’s decision to publish its contents, it would be a cruel irony were she required to pay that price before her claim has even been determined.”

Mr Rushbrooke said that the publisher had made the interviews with People relevant to the case and had “forced” the duchess to identify the names of the five friends in a court document.

Meghan’s lawyers also argue that ANL has “already demonstrated a willingness to publish articles” based on the contents of court documents.

Mr Rushbrooke added: “There can be little doubt that, in addition to defending this case through the courts, the defendant is seeking to maximise the publicity surrounding this case, which it has repeatedly dubbed ‘the trial of the century’.”

The barrister said “there is ample evidence before the court” to support his client’s application to maintain the anonymity of her five friends.

He added that one of the five, known only as Friend B, had provided a witness statement to the court in support of the application.

Mr Rushbrooke told the court Friend B was “the best possible person” to provide evidence as “she is the one who actually orchestrated the interviews”.

He added: “These were confidential sources who gave the interviews on condition of anonymity.”

In written submissions, Antony White QC, acting for ANL, said the friends are “important potential witnesses on a key issue”.

“Reporting these matters without referring to names would be a heavy curtailment of the media’s and the defendant’s entitlement to report this case and the public’s right to know about it,” he said.

“No friend’s oral evidence could be fully and properly reported because full reporting might identify her, especially as there has already been media speculation as to their identities.”

He said the present order sought by the duchess’s lawyers would leave Meghan entitled to disclose the identities to anyone – including the media – who could publish it, while ANL’s titles would remain barred from doing so.

Mr White said the duchess had “used” her public profile and PR team to “publicise and promote the merits of her own position” since starting the action.

He referred to a press statement issued by Harry and Meghan on October 1 last year announcing the legal action, claiming the couple had used “highly emotive terms”.

ANL won the first skirmish in the legal action on May 1, when Mr Justice Warby struck out parts of Meghan’s claim, including allegations that the publisher acted “dishonestly” by leaving out certain passages of the letter.

Mr White referred to a press release issued by the duchess following the ruling, suggesting that she had put out “regular briefings” on developments in the case.

He said: “These matters show the lengths to which the claimant has gone to publicise her case and developments in this claim to promote the merits of her position, even at the cost of fairness and accuracy.

“There is no evidence indicating that the defendant has done the same, or that it wishes to report the names of the friends other than perfectly properly as part of reports of these proceedings.”

In a witness statement submitted earlier in July as part of the application, Meghan said: “Each of these women is a private citizen, young mother, and each has a basic right to privacy.

“Both the MoS and the court system have their names on a confidential schedule, but for the MoS to expose them in the public domain for no other reason than clickbait and commercial gain is vicious and poses a threat to their emotional and mental wellbeing.

“The MoS is playing a media game with real lives.”

Mr Justice Warby said he will give his decision on the duchess’s application in writing at a later date.

Meghan is suing ANL over five articles, two in the MoS and three on MailOnline, which were published in February 2019 and reproduced parts of a handwritten letter she sent to her father in August 2018.

The duchess is seeking damages from ANL for alleged misuse of private information, copyright infringement and breach of the Data Protection Act.