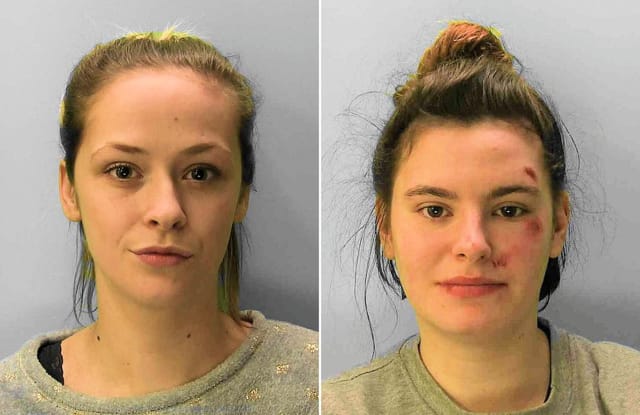 Dramatic footage has been released showing an attack on police officers who were trying to break up a lockdown party.

The noisy and drunken gathering in Eastbourne descended into violence and one woman told an officer: "I have got corona, watch out."

The video, captured by a bodyworn camera, shows the moment an officer is hit by a heavy object and doubles over in pain as he tries to calm the situation.

Earlier, a woman can be heard telling another officer: "I've got a cough, and that's coronavirus. What are you going to do then?"

Three women have been sentenced in relation to the "raucous" party, which took place in April despite Britain being at the height of the coronavirus lockdown.

Millie Robinson and Bayleigh Meadows, both 21, were jailed last month for their part in the fracas, while Nicole Stonestreet, also 21, received a suspended sentence on Tuesday.

In the video, released by Sussex Police on Wednesday, officers are seen responding to the party in a block of flats on April 8.

The defendants can be seen in footage from the flat and the incident becomes violent as it spills out into the hallway.

At one point, Meadows is seen picking up a toilet roll holder with a stone base and launching it at one of the officers, hitting him on the head, as described in court at her sentencing.

The officer is seen doubling over in pain and his colleague is clearly concerned for his welfare.

He was left with a 2cm cut and a lump on his head which had to be glued back together.

He described the struggle as a "fast and surreal moment".

At the end of the video he is seen sitting in the boot of a police car with his hand covering the wound as he is checked over by officers.

At their sentencing, Judge Christine Laing QC criticised Meadows and Robinson for committing the offences while the rest of the country was obeying lockdown rules.

She said: "Police officers on a daily basis have to face risks to protect the public, perhaps never more so than during a pandemic. They should not have to deal with behaviour like that which we saw, ever."

– Robinson, of Edgeland Terrace, was jailed for six months after pleading guilty to two charges of assaulting an emergency worker.

– Stonestreet, of Seaside, was jailed for four months, suspended for 18 months, after pleading guilty to assaulting an emergency worker.