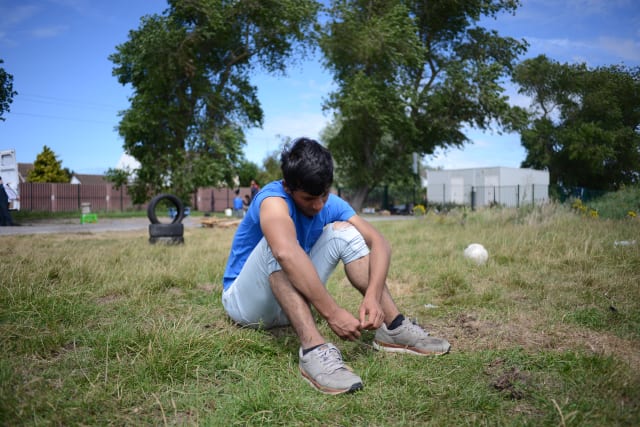 “Cruel” evictions of migrants from camps in Calais are at their highest intensity for years and attempts to cross the English Channel have risen as a result, campaigners have claimed.

Aid workers in northern France say police evictions are happening at the highest levels since the Jungle camp was cleared in 2016.

In one incident, more than 500 migrants were put onto buses and moved away ahead of a visit from UK Home Secretary Priti Patel earlier this month.

Clare Moseley, founder of the humanitarian charity Care4Calais, said conditions in the French city are as bad as she has seen since 2016 and criticised police tactics.

Calais MP Pierre-Henri Dumont told the PA news agency that he believes there is “no link” between the evictions and attempts to cross the Channel.

He said the huge number of migrants trying to reach the UK is down to “British law and way of life” and said migrants would rather live secretly in the UK than claim asylum in France.

More than 3,100 migrants have made it across the Channel to the UK in 2020, PA analysis shows.

Ms Moseley, who runs charity Care4Calais, said a safe, legal process for the people in Calais is essential to end what she says is a humanitarian crisis.

She also criticised police tactics – including the use of tear gas – and the forced evictions of migrants from the camps where they live.

Ms Moseley said: “This policy is cruel and it is counterproductive. It succeeds only in increasing the numbers of people desperate enough to make a dangerous attempt to cross the Channel.

“Priti Patel and the French authorities are only adding to the chaos in the Channel, they have no strategy to protect vulnerable refugees and get control of our borders long term.

“The people in Calais are normal people: doctors, builders, sons and fathers. Terrible things have happened to them, they’re fleeing wars, torture and persecution.

“The least we can do is give them a fair hearing and treat them with decency and dignity.”

She called on Ms Patel and her counterparts in France to “stop grandstanding” and tackle the root of the problem.

Calais MP Pierre-Henri Dumont said he too noticed a “huge dismantlement” of a migrant camp before Ms Patel’s visit.

However, he said that since then migrants have returned to the area in larger numbers.

He added: “To me, there is no link between the dismantlement and the crossings. The huge number of crossings is the result of the British law and way of life, making it easier for the migrants to live in clandestinity in the UK, to work and find a place to live, than in France.

“Actually, the migrants in Calais would rather live clandestinely in the UK than claiming asylum in France.”

He also defended police actions in the area.

Following their joint visit to Calais on July 12, Ms Patel and new French interior minister Gerald Darmanin agreed to create a Franco-British intelligence cell in an effort to reduce the numbers of small boats making it to the UK.

On the same day, a record number of migrants made it to the UK, with at least 180 making it across the Channel.