Statues cause stir between South Korea and Japan 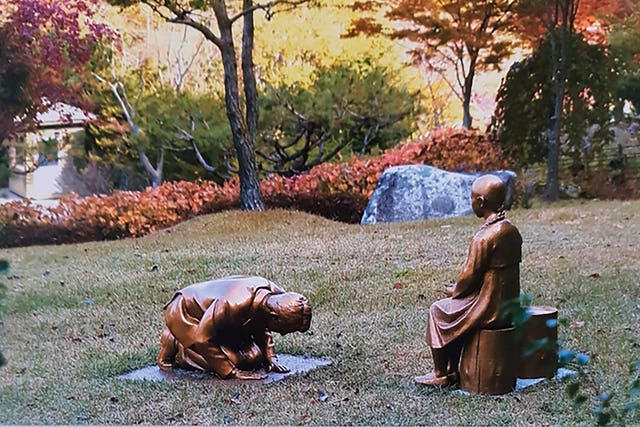 Statues in South Korea of a man kneeling in front of a girl symbolising victims of sexual slavery by Japan's wartime military have become the latest subject of diplomatic sensitivity between the countries.

Kim Chang-ryeol, owner of a botanic garden in the mountain town of Pyeongchang, said he cancelled an unveiling ceremony for the bronze statues that was to take place on August 10 because of what he described as unwanted controversy.

Mr Kim said that the statues were his idea, but that he did not specifically intend the male figure to be Japanese Prime Minister Shinzo Abe.

Since his inauguration in 2012, Mr Abe has stoked anger among South Koreans over his nationalistic stance on Japan's wartime past and his demands that South Korea remove similar statues symbolising sexual slavery victims in front of the Japanese embassy in Seoul and other sites.

But the statues at Mr Kim's Korea Botanical Garden drew criticism among some South Koreans too, who described them as tacky or excessively provocative on social media.

Mr Kim defended the statues, saying they reflect his wish for the countries to resolve their conflicts over history.

He did not expect the statues to trigger political debates.

"The man could be Abe and also couldn't be Abe," said Mr Kim, who will continue to keep the statue at his garden.

"The man represents anyone in a position of responsibility who could sincerely apologise to the victims of sexual slavery, now or in the future. It could even be the girl's father. ... That's why I named the statues Eternal Atonement."

Relations between South Korea and Japan sank to their lowest point in decades last year as they allowed their decades-long dispute over wartime history to spill over on issues regarding trade and military co-operation.

During a briefing in Tokyo, Japanese chief cabinet secretary Yoshihide Suga said it would be unacceptable under "international courtesy" if the statues' male figure did indeed represent Mr Abe.

"I think such a thing is unforgivable under international courtesy," Mr Suga said.

Disputes over sex slaves are a legacy of Japan's 1910-45 colonial occupation of the Korean Peninsula.

Historians say tens of thousands of women from around Asia, many of them Korean, were sent to front-line military brothels to provide sex to Japanese soldiers during the Second World War.

Under South Korea's previous conservative government, the countries attempted to settle their decades-long dispute over sexual slavery in 2015 when they reached an agreement for Tokyo to fund one billion yen (£7 million) to a Seoul-based foundation to help support victims.

The deal was hugely unpopular in South Korea, where many people criticised their government for settling for far too little and accused Tokyo of attempting to silence the victims with money.

The liberal government of current South Korean President Moon Jae-in, who took office in 2017, took steps to dissolve the foundation, saying that the deal lacked legitimacy because officials failed to properly communicate with victims before reaching it.

Man who died in church grounds was fatally kicked in the head, police say