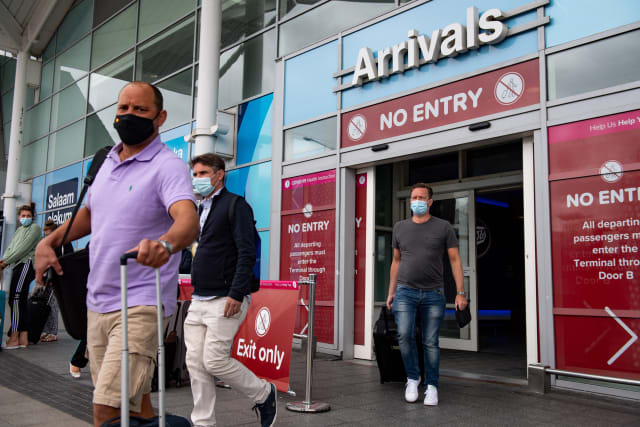 Travellers returning from Spain have expressed their frustration at the short-notice quarantine requirements.

In a decision announced on Saturday – less than five hours before it came into force – Spain was removed from the UK’s list of safe destinations after it saw a spike in the number of coronavirus cases.

Joe Allen, a TV producer from London who visited Madrid and returned on Sunday, said he felt let down by the lack of information to travellers about the “knee-jerk” decision.

Mr Allen told the PA news agency: “We waited for the appropriate time and I specifically waited for the quarantine to have been lifted from Spain, and I absolutely wouldn’t have gone with a quarantine.

“We all sort of resigned ourselves in fact pretty quickly that there was nothing we could do about it, we just have to follow the rules and we get that, but I think we’re all frustrated.”

The 32-year-old said he had not had any official communication from the Government about the quarantine.

He added: “I was expecting perhaps at border control there’d be some big old posters or digital screens or people with megaphones perhaps saying ‘Don’t forget you need to isolate’.

“What would have been useful is for someone who made it clear in advance – ‘There is a real possibility that you could get stopped from coming home’.

“You can argue that I was naive for not knowing that, but I think it might have been helpful.”

Laura Wood, 41, from Oxfordshire, flew from Gatwick to Spain’s Costa Blanca with her family for a two-week holiday, also returning on Sunday, shortly after the measures took effect.

She told PA: “It was a bit of a last-minute disappointment to the end of the holiday but we’re going to get on with it. There has to be a cut-off, I guess, and we were just on the unlucky side of it.”

“It was a different type of holiday than we’ve had, you don’t kind of expect to be walking along the seafront wearing a mask in 30-degree heat,” she added.

Mrs Wood said she had experienced some “smug” responses from people at home and online after the measures were announced.

“I think it works both ways; I don’t think people can complain about the quarantine necessarily because we knew we were taking risks, but I think people’s joy at other people’s misfortune is a bit sad.”

Sophia Fadil, from Brighton, 32, works in retail after being made redundant during lockdown from her job in the travel industry.

She is currently on holiday in the Alicante region with her partner, who is a nurse, and her five-year-old son.

She told PA the measures are a “slap in the face” for the travel industry.

“It’s just a really rubbish situation as I kind of feel it’s one step forward and then two steps back when it comes to the travel industry,” she said.

“I probably wouldn’t have travelled out here had I known this in advance, so in a sense I’m kind of glad I’m already here.

“I think this was outrageous that the Government finally confirmed it three hours before it was implemented so that didn’t give anyone enough time to travel home if they needed to.”

Laura Martin, a 27-year-old au pair who lives in London, is unable to return to work for 14 days due to the quarantine requirement for arrivals from Spain after she returned from Madrid.

“The quarantine is not a problem. I think it’s just for people’s safety,” she told PA.