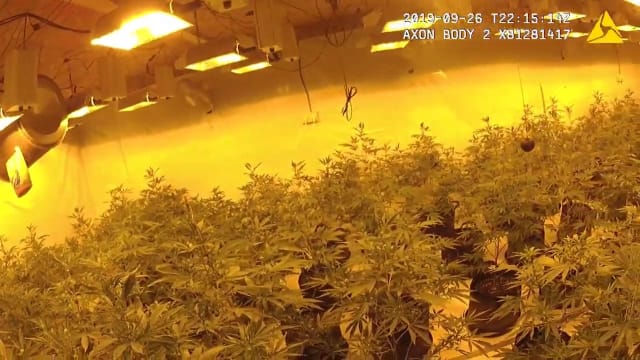 Dramatic bodycam footage has shown the moment officers uncovered a cannabis farm with dozens of plants inside.

The video, released by police on Monday, comes after three men were jailed for a total of more than seven years.

Haxhi Gjocera, Diamant Jaku and Ajet Nerguti were caught after an investigation by the Kent and Essex Serious Crime Directorate.

In the footage, officers can be seen moving in on an industrial unit in Kent under cover of darkness, and banging on the metal shutters, shouting: "Police! Open it now!

"Open it now or we're going to rip it open!"

Inside they found the floors covered with row upon row of leafy cannabis plants growing under bright lights.

The raid, which took place on September 26, 2019, came after a tip-off from an anonymous informant.

Police sent a helicopter over the unit at Shipyard Industrial Estate for surveillance, which showed an unusual amount of heat was coming from it.

At the Faversham site, officers uncovered 98 mature plants and 117 saplings, which had an estimated street value of £38,700.

Nerguti was also found at the scene and arrested.

Another warrant was executed in the basement of a shop in Herne Bay High Street.

Jaku was also arrested on the same evening, as he ate at a nearby restaurant, and Gjocera was detained at a nearby address.

All three men each admitted being concerned in the production of cannabis and were sentenced at Maidstone Crown Court on July 23 2020.

Gjocera, 31, of no fixed address, was sentenced to three years.

Jaku, 26, of Beach Road, Westgate-on-Sea, was sentenced to two years and three months.

Nerguti, 26, of no fixed address, was sentenced to one year and 10 months.

Detective Constable Steve Brown, Kent Police's investigating officer for the case, said: "These offenders plotted to make a significant amount of money from the illegal cultivation of cannabis and had a well-organised pattern of offending.

"There is no place for such criminality in our county and, as this case shows, we will not hesitate to take robust action against people involved in supplying drugs.

"Tackling drug dealing is a priority for Kent Police and members of the public can help with our efforts by reporting any suspicions to us. Reports can be made by calling 101 or via our website.

"You can also contact the independent charity Crimestoppers, anonymously, on 0800 555111 or complete the online form at www.crimestoppers-uk.org."