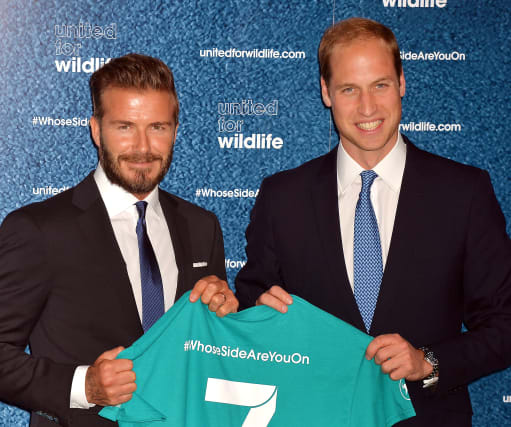 David Beckham has spoken about the "brutal" reaction he faced following his 1998 World Cup sending off during a discussion about football's mental health culture.

Beckham was vilified by some fans and sections of the media after England were knocked out of the tournament by Argentina, following his red card for kicking out at an opponent.

The former England captain said he was supported by his club Manchester United and family but it was an era when players did not speak out if they were feeling the pressures of the game – and he kept his feelings hidden.

The celebrity was speaking during a video call convened by the Duke of Cambridge who has launched a declaration – signed by governing bodies, leagues and organisations from across UK football – to create a "mentally healthy culture" in the sport.

These organisations will form a UK-wide mental health implementation group next season, working towards a collective "game plan" to prioritise the psychological wellbeing of everyone involved with football.

Beckham, who is now co-owner of the US football club Inter Miami, said about his infamous World Cup match: "I made a mistake you know, I made a mistake in '98 and the reaction at the time was pretty brutal.

"I was constantly criticised on the pitch verbally. Like I said at the start of this, times have changed. If social media was around when I was going through that time in '98, it would have been a whole different story.

"But I was lucky. I had a support system in Manchester United and the manager and obviously family, but did I feel at the time it was OK to (go to) someone and say 'I need help'?

"I would say no, no, it was a different era and I just felt I had to keep it all in and deal with it myself."

William asked about his job supporting his players at Inter Miami and Beckham replied: "Without a doubt, my role has slightly changed from being a footballer to now being an owner and it's one thing obviously now being an owner of a football club, the most important thing to us is that our players feel protected.

"The pressures that your modern day athletes and footballers have, are taken care of, that's the most important thing.

"Of course we want to be successful, but more importantly, we want our players to be looked after."

The video call held earlier this month was made in support of William's Heads Up initiative which this season has been encouraging football fans to talk about issues in their lives or be a sympathetic ear for a fellow supporter.

The FA Cup Final between Arsenal and Chelsea is being staged on Saturday and has been renamed the Heads Up FA Cup Final, after the duke's campaign.

Speaking about the declaration signed by the football family William said: "We've managed to get the entire football community to sign up to promoting and showing how important mental health is in football and therefore hopefully in society through fans and things like that.

"And I think that's shown real leadership that we've got the Heads Up FA Cup Final renamed."

In a lighter moment, William concluded by addressing Ancelotti, saying: "And Carlo, last but not least to you... the wisest one of us all here, that's for sure."

The 61-year-old is one of only three managers to have won the Uefa Champions League three times – twice with Milan and once with Real Madrid.

Now manager of Merseyside club Everton, after winning the Premier League with Chelsea in 2010, Ancelotti said he was encouraged by changing attitudes to mental health within the game but admitted it was "really rare" for players to speak to the manager about any issues.

"In my experience it is really rare that the players come to you and say 'mentally I am not good' – really rare, it never happens," he said.

"In the past few years something is changing."