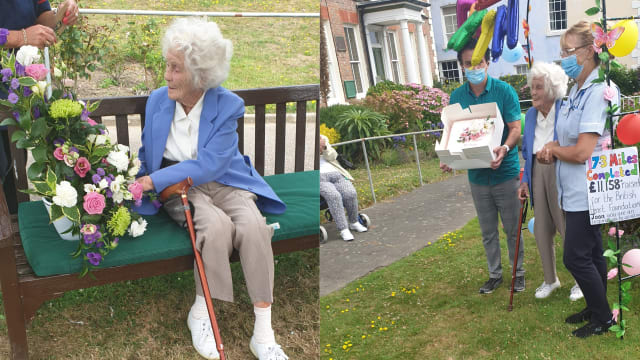 A 104-year-old woman is the pride of the British Heart Foundation’s newly reopened shops after raising more than £50,000 for the charity.

Joan Willet aimed to raise £500 for the charity by walking 17 miles up and down the hill outside her care home in Hastings, East Sussex, having been inspired by Captain Sir Tom Moore’s efforts.

And, after she raised in excess of £50,000 through her own six-week challenge, the British Heart Foundation has honoured Mrs Willet with special posters in its 750 shops nationwide.

Mrs Willet, a former teacher, had life-saving valve replacement surgery after a second heart attack when she was 82.

Since then, she has aimed to keep herself fit by walking up and down a steep hill near the home where she has lived for more than two decades.

Dozens gathered by the hill on Mrs Willet’s birthday to see her complete her challenge, presenting her with gifts, flowers, cards and cake to celebrate.

“When I was 82 years old, I suffered my second heart attack which meant I needed a double heart bypass and a new synthetic valve,” said Mrs Willet, who is continuing to walk the hill for her own fitness.

“I am so grateful to the BHF and its research that made operations like mine possible.”

The British Heart Foundation also presented Mrs Willet with an engraving on its Heart of Steel sculpture in Sheffield.