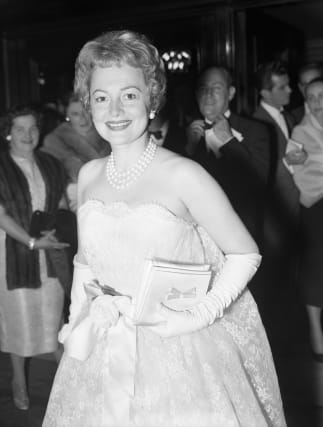 Tributes have been paid to Gone With The Wind actress Dame Olivia de Havilland following her death aged 104.

The actress, one of the last surviving figures of Hollywood’s Golden Age, died at home in Paris, her representatives confirmed.

A statement said: “Last night, the world lost an international treasure, and I lost a dear friend and beloved client. She died peacefully in Paris.”

The estate of fellow Hollywood great Humphrey Bogart, the Oscars, Golden Globes and SAG-AFTRA actors union were among those who paid tribute.

The Bogart estate, led by the late actor’s son, described Dame Olivia as a “true Classic Hollywood icon” in a statement.

It said: “We have lost a true Classic Hollywood icon. The legendary Olivia de Havilland has died in Paris at age 104.

“The two-time Oscar winner and Gone With The Wind star successfully fought the studio system in the 1940s.”

The Academy of Motion Picture Arts and Sciences, which hosts the Oscars, said in a statement: “To Each His Own, The Heiress, Gone with the Wind and so many others.

“A two-time Best Actress Oscar winner, Olivia de Havilland was a mainstay of Hollywood’s Golden Age and an immeasurable talent. Here’s to a true legend of our industry.”

The Golden Globe Awards, where Dame Olivia was nominated on three occasions and won twice, shared a short tribute.

“Her (guts) & grit to take on the studio system in 1945 helped her fellow actors for generations to come. Our condolences to family & friends.”

In an apparent reference to the announcement of Fleetwood Mac co-founder Peter Green’s death on Saturday, actor William Shatner said: “Not a good weekend: the great Olivia de Havilland has passed.”

Dehenna Davison, the Conservative MP for Bishop Auckland, said: “Just heard the sad news about Olivia de Havilland. One of the greats of the Golden Age. Her performance as Melanie in Gone With The Wind was sublime.

“My thoughts are with her family and loved ones at this difficult time.”

However, she is best remembered for her turn as Melanie Wilkes in the 1939 film Gone With The Wind and was the last remaining member of the principal cast before her death.

Dame Olivia was born to British parents in Tokyo on July 1 1916 – the first day of the Battle of the Somme – but moved to California when she was young.

She first appeared on the big screen in 1935 as Dolly Stevens in Alibi Ike.

Soon she became known for her on-screen partnership with Hollywood heartthrob Errol Flynn on films including The Charge Of The Light Brigade (1936) and The Adventures Of Robin Hood (1938), although they never began a romantic relationship.

After leaving Hollywood in the 1950s, the actress moved to Paris with her second husband.

She made a number of television appearances and often worked on several movie titles a year until her last TV movie role as Aunt Bessie Merryman in The Woman He Loved in 1988.

Her younger sister, Joan Fontaine, with whom she had a famous rivalry, followed in her acting footsteps, winning an Oscar for her role in Alfred Hitchcock’s 1941 thriller Suspicion.

She said in a statement to the PA news agency at the time: “I am extremely proud that the Queen has appointed me a Dame Commander of the Order of the British Empire.

“To receive this honour as my 101st birthday approaches is the most gratifying of birthday presents.”

Dame Olivia was also responsible for the so-called “De Havilland Law”, a landmark 1944 ruling that ended the tight grip studios had on contract actors.

In 2019 she lost her lawsuit over a television series she claimed depicted her falsely and unfairly.

FX’s anthology series Feud: Bette And Joan, about the lives of Bette Davis and Joan Crawford, features Catherine Zeta Jones in the role of Dame Olivia.

She claimed producers were guilty of “unauthorised and false use” of her “name and reputation”.

Gone With The Wind was recently at the centre of controversy after it was removed from the HBO Max streaming service over its depiction of the pre-Civil War South.

It has since returned with a message saying it “denies the horrors of slavery”.