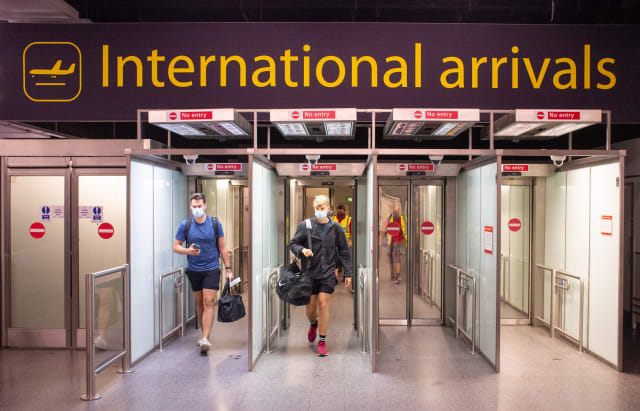 The Government has been urged to take a more “targeted” approach to travel quarantine rules after holidaymakers were left “shocked and confused” by Spain’s removal from the safe countries list.

The change means all travellers returning from the country, including the Spanish islands, will have to self-isolate for two weeks.

Mother-of-two Liz Samandi, currently holidaying on the Spanish island of Majorca, said the new rules had left her “angry”.

The 52-year-old business owner from Market Harborough, Leicestershire, is due to return from a family break on Thursday.

Speaking to the PA news agency, she said it was “frustrating” that people already abroad had been given “no choice” in relation to the new rules.

“I just feel a bit angry as well actually that they’ve done this and not considered the people that are already here,” she added.

Highlighting the lower number of Covid-19 cases in Majorca compared to parts of mainland Spain, Mrs Samandi backed the use of regional travel corridors and having testing for arrivals at UK airports.

“It’s the blanket approach which I think is wrong, it should have been a more targeted area I think,” she said.

Mrs Samandi said “strict” coronavirus precautions in Spain made her hotel feel “more than safe”, including the supply of hand sanitiser, using plastic gloves at the buffet, cleaning sun loungers and social-distancing rules.

On arrival her family also had to provided extensive personal details to support Spain’s track and trace efforts.

Chloe Harris, 23, from Kent, who booked a last-minute trip to the Spanish island of Lanzarote and arrived on Saturday said she was “gutted” to hear the news.

She told PA: “When I heard the news I was quite shocked because I thought they would have given us some warning. Even just some warning that this was something they were going to consider.”

Speaking before the official announcement on Saturday, she added: “I would probably be fine to continue working from home and quarantine from home, although I would have to stop going into the office.

“However, my friend who I travelled with is due to start a new job on August 3 and so that’s going to be difficult to explain to her employer.”

Neil Hunter, 45, from Sittingbourne in Kent, had booked a 10-day break to Lanzarote, leaving on Tuesday. The trip had been booked since last December but has now been thrown into doubt.

He told PA: “We were going as a family, my wife Amanda, and teenage daughter Bethany but to be honest, since this announcement, I’m unsure what’s going to happen as I work as a train driver, and I don’t think my employer will accept me having to isolate due to going on holiday.

“I am insured, but unsure whether they’d accept that as a reason for not going, especially if Hays Travel don’t cancel for me. There’s no way I could afford to cancel myself.”

He said he understood why the decision had been taken, but that it “is a lot of money and disappointing all the same”.