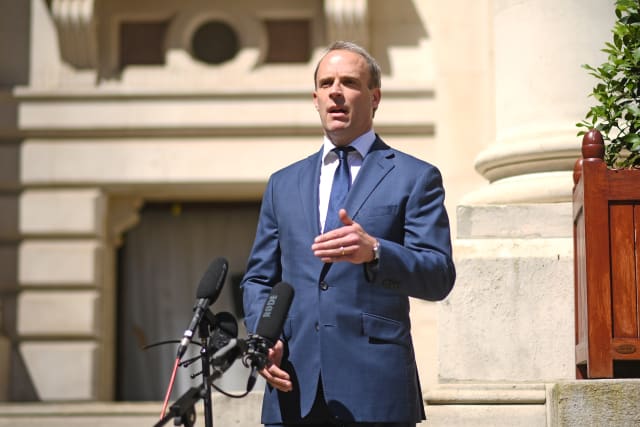 Foreign Secretary Dominic Raab confirmed he would be staying home this summer as he looked to avoid becoming the latest minister to fall foul of the Government’s newly-imposed travel restrictions on Spain.

Transport Secretary Grant Shapps is currently taking a break in Spain and will have to self-isolate for 14 days on his return after the UK’s most popular holiday destination was struck off the safe list of travel destinations on Saturday.

Paul Scully, minister for London, will also have to quarantine after declaring on social media that he was on holiday in Playa Dorada, Lanzarote.

He posted an image of a drink on Instagram with the caption: “Best turn to gin. I’ll still be able to work. Just no shopping or running I guess #quarantine.”

Mr Raab told Sky News’ Sophy Ridge On Sunday there was an “element of uncertainty this summer if people go abroad” and that he had instead chosen to stay put.

“I’m not going to tell people what they should and shouldn’t do, they should follow the advice, I’m going to be staying at home this summer,” he said.

“We’ve got lots on, so that’s a personal decision really.”

The First Secretary of State said Mr Shapps had been understanding about the need to reimpose tight controls on those arriving into the UK from Spain.

According to The Sunday Times, Mr Shapps, whose department formally announced the rule change, had to dial in from Spain to discuss altering the guidance with Cabinet colleagues on Saturday.

“I think it shows you the risk to everyone,” said Mr Raab, when asked about his reaction to Mr Shapps’ being “trapped by his own quarantine”.

“I spoke to Grant Shapps yesterday afternoon and it shows you we’ve brought swift measures that we can put in in real time.

“Like anyone, I think he empathised with many other people going through that but he recognised of course, and we as the decision makers recognise, that we have to take these measures to protect the country.

“As we come through the easing of the lockdown, if you look at the strategy, if you look at what we said all along, we need to be able to take targeted measures when there is a flare-up in the virus.