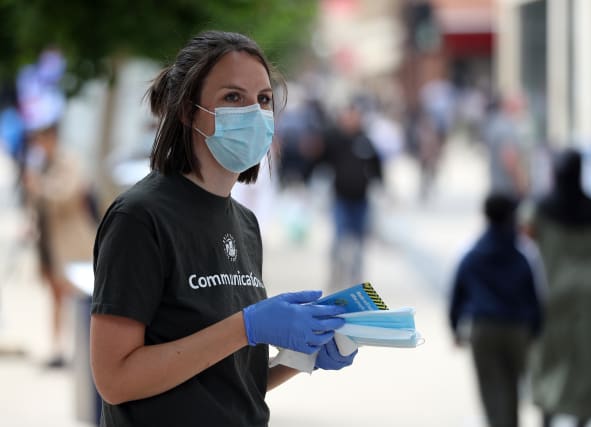 The number of shoppers declined by 0.2% on Friday compared to the previous Friday, following a week of relatively steady increases in traffic to stores and supermarkets.

Friday marked the first day that shoppers in England had been legally obliged to wear a face covering or risk a fine.

Anyone flouting the rules without an exemption risks a £100 fine – reduced to £50 if paid quickly.

Data from retail intelligence company Springboard revealed the drop in footfall in England compared to modest growth in shoppers elsewhere in the UK where different regulations on face coverings are in force.

Traffic to shops increased 5.9% in Scotland, 2% in Northern Ireland and 1.7% in Wales on Friday.

Diane Wehrle, Springboard’s marketing and insights director, said: “It seems that on the first day of the mandatory wearing of masks in stores and enclosed destinations in England shoppers were cautious about making trips.”

But she added: “Footfall may well strengthen over the next days and weeks as consumers become used to wearing masks.”

Encouragingly for other retailers, Scotland – the country with the strongest growth – made face coverings mandatory in shops on July 10.

Face masks are advised in Wales in situations “where social distancing is not possible” but are not yet obligatory in shops.

They will become mandatory on Welsh public transport networks from Monday.

Northern Ireland made face coverings mandatory on public transport on July 10 and the could also become legally necessary in shops if the public do not adopt them voluntarily in significant numbers.

Despite the easing of lockdown measures, retail footfall on Friday was still down between 36% and 41% across the UK compared to the same period last year.