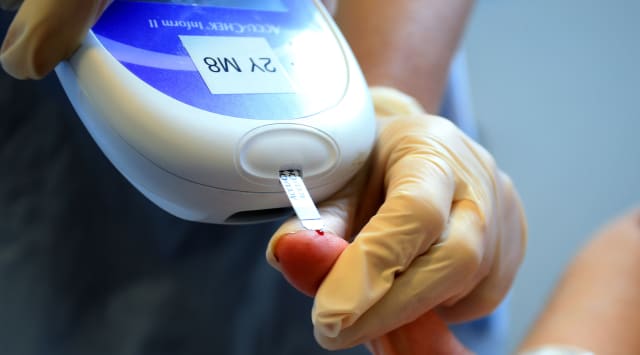 People at risk of developing type 2 diabetes will be able to self-refer to specialist services from Monday in a bid to curb one of the biggest risk factors in Covid-19 deaths.

A third of people who died in hospital with Covid-19 had diabetes, according to Public Health England data, and over 12.3 million people in the UK are at risk of developing the disease.

NHS England is now rolling out rapid access to the Healthier You service, which was first launched in 2016.

Previously a patient needed to be referred by a healthcare professional and have a blood test, but now people will be able to use an online tool to calculate their diabetes risk.

Hosted by Diabetes UK, users of the Know Your Risk tool are asked questions including their age, weight and ethnicity.

If their score comes back as moderate or high they will be able to refer themselves to a local Healther You programme.

Weight-loss support will include group sessions by video-link or telephone with a coach, online support groups and in some areas access to wearable tech to monitor physical activity.

From August, there will also be a specific campaign to promote the programme to black and south Asian communities after research revealed they are more at risk of both type 2 diabetes at younger ages and coronavirus.

NHS chief executive Sir Simon Stevens said: “The evidence is now in – severe obesity can double your chance of dying from coronavirus.

“So this pandemic is a call to arms to adopt medically proven changes in what we eat and how we exercise.”

Since its inception, over half a million people have been referred to the Healthier You scheme, with those completing the nine to 12 month programme losing an average of 3.6kg.

“Not all of those at risk live with obesity or carry excess weight, but as many as three in five of these cases could be prevented or delayed with the right support.”

Tariq Khan, a 35-year-old chef from Birmingham, has lost almost a stone since beginning the diabetes prevention scheme in November.

Mr Khan said: “Life as a chef can be really hectic. I also had a sweet tooth which meant that I was eating unhealthily and often very late.

He added: “I’ve learnt so much about how my body works and how the choices I make can affect it. I’ve cut a lot of fried food and sweet treats from my diet as well as having smaller portions.

“I haven’t missed a class and I know that what I’ve learnt will stay with me forever.”