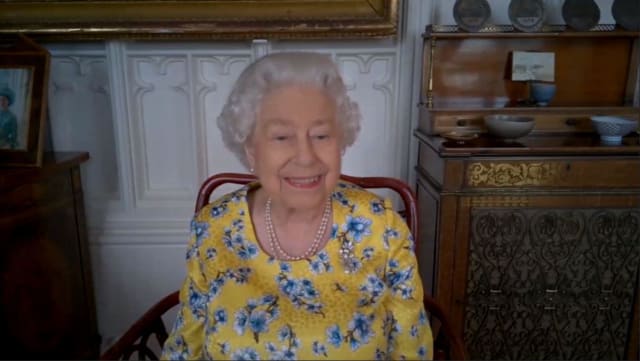 The Queen has ticked off another first during lockdown: the virtual unveiling of a new portrait.

Despite seeing the artwork of herself via videocall, it was clear she has not lost her eagle eye.

The Queen joked that a tea cup featured in the painting had no tea in it, the artist revealed, as she paid tribute to her "luminous" sitter.

Miriam Escofet painted the portrait, which was commissioned by the Foreign and Commonwealth Office (FCO) as a "lasting tribute to Her Majesty's service" to diplomacy.

Portraits of the Queen
Martin McGuinness Deputy First Minister of Northern Ireland, poses next to a portrait of Queen Elizabeth II painted by artist Colin Davidson, during a Co-operation Ireland reception at Crosby Hall in London, Tuesday, Nov. 8, 2016. (Jeff Spicer/Pool Photo via AP)
A portrait of Her Majesty Queen Elizabeth painted by Isobel Peachey decorates the luxury cruise liner Queen Elizabeth docked in Port Everglades in Fort Lauderdale, Fla., Sunday, Jan. 16, 2011. (AP Photo/Alan Diaz)
Artist Justin Mortimer kneels before his controversial new portrait of Queen Elizabeth II at the Royal Society for the Encouragement of Arts, Manufacturers and Commerce in central London Tuesday January 13, 1998. The portrait shows a departure from traditional portrait painting, depicting the Queen in a relaxed mood and wearing no crown or jewellery and will hang in the Society's headquarters. (AP Photo/Louisa Buller)
The Queen views a portrait of herself painted by Peter Hawkins, at rear, during a visit with the Duke of Edinburgh to Radley College, Abingdon, Oxon, to open a new building Thursday Nov. 27, 1997. (AP Photo/ WPA POOL/ John Stillwell)
Andy Warhol's Reigning Queens: Queen Elizabeth II portraits on show in the Lower Library at Windsor Castle, after being acquired by the Royal Collection.
A portrait of Queen Elizabeth ll and Prince Philip, Duke of Edinburgh by Kenyan artist Joachim Onyangeo outside the Mildmay Centre for Aids Orphans in Kampala, Uganda.
Nigerian artist Chinwe Chukwuogo-Roy stands in front of a portrait of Britain's Queen Elizabeth II which she was commissioned to paint to mark the Golden Jubilee. The painting was unveiled today.
Edward Halliday putting the finishing touches in his St John's Wood, London, studio to his portrait of Queen Elizabeth II, which is to hang in the Southampton Bar.
Up Next

The Queen saw the painting for the first time via her computer screen, before speaking to members of FCO staff about their work around the world during the coronavirus crisis.

The virtual visit was hosted by Sir Simon McDonald, permanent under-secretary of state for foreign and commonwealth affairs and head of the Diplomatic Service, who was joined by the artist for the unveiling.

Ms Escofet told the Queen during the unveiling that she had included a hidden symbol in the painting – the insignia of the FCO – painted on to a tea cup.

The artist said afterwards: "She seemed to react very positively to it. She was smiling, asking how long it took and if I had any more projects on the go after this.

"When I explained certain elements of the painting, the tea cup, she made some amusing comments.

The painting took seven months to complete, with the final stages finished in lockdown.

Ms Escofet had two sittings with the Queen – one at Windsor where she spent around half-an-hour photographing the monarch and the second at Buckingham Palace to focus on her facial expressions.

She was chosen on the recommendation of the National Portrait Gallery after she won the BP Portrait Award with a painting of her mother, which Sir Simon said had perfectly captured the "luminosity and dignity" of her subject.

The Palace had been shown a sketch of her plans for the Queen's portrait but had been "very hands off" and had not interfered, she said.

The second sitting at Buckingham Palace came in February, shortly before the reality of the coronavirus pandemic hit the UK, with artist and subject even discussing the situation in Wuhan during their time together.

Of the sittings, Ms Escofet said the "intensely precious" time flew by.

Ms Escofet said: "She's a very experienced sitter. She's fantastic. She's very much focused on giving you what you need.

"She's very present in the room and focused on the job in hand. She has a sense of humour there bubbling under the surface. She was very down to earth, if that's not a silly thing to say.

"In the first sitting I was asking about her experience with previous portraits and whether she had any particular favourites. I tried to tease it out of her, but she was very diplomatic.

"Because it was at Windsor, a plane flew by and she commented on the noise.

"The second time, I did most of the talking because I wanted to get a reaction from her face."

The painting was unveiled over videocall, with Ms Escofet at the FCO where she mounted the portrait on her own easel with a cloth draped over it.

As she and Sir Simon pulled the drape down, she said the Queen "smiled and looked very pleased".

Ms Escofet explained some of the details in the painting, which was inspired partly by Holbein's The Ambassadors and the anamorphic distortion technique used by Renaissance painters.

As such, she said, she resolved to have a "slightly surreal" but appropriate element as something "intriguing for people to stumble upon".

She told the Queen she had settled on a tea cup, including the insignia of the FCO on the saucer and reflected in the cup itself.

The artist said: "It felt really right to apply it to the tea cup. Suddenly this very humble object carries this symbolism representing the FCO and linking the portrait to its destination.

"I explained this to the Queen and she made this very humorous comment about how there's no tea in the cup.

"I said I'm afraid the tea has been sacrificed for the symbolism."

On the challenges of painting the Queen, she said she had tried to capture the essence of the private monarch alongside the knowledge she was "probably the most recognisable person in the world".

She added: "What I wasn't expecting was her humour. I'm not saying she's cracking jokes, but you can feel it.

"There's a real sharpness, a keenness, she's really there, she really takes you in. I guess it's a wisdom.

"I really wanted to catch that essence of her in the portrait. That's a quality that you only really feel when you meet someone.

"She's a very powerful, small person, and quite luminous. You can feel this life energy from her, it's very striking.

"That became very useful for me because it meant I could get almost an aura of regalness around her in what was actually trying to be a very humane portrait of her."

Sir Simon said the FCO was delighted with the "terrific" portrait.

He added: "There's truth and dignity and wisdom in the portrait.

"We are Her Majesty's diplomatic service. There is a bond between this organisation and the monarch. For people to be able to say that the Queen was interested and impressed with their work is a wonderful and really motivating thing."

Also on the videocall was Sanjibita Tariang, who has worked for the FCO for 19 years and is regional consular development officer at the British Deputy High Commission Kolkata, India.

She spoke about her role in repatriating more than 14,500 Britons after the pandemic struck.

She told the Queen about the challenge of co-ordinating the journey of one woman, who made a five-day, 2,800km trip through a locked-down country to board a plane home.

"Seeing the smiles when they return home and they send you the picture with their family, that's what we work for. It makes it all worthwhile," she said.

"She (the Queen) asked a few questions but she was listening and you could see she was impressed.

"For me, it's a dream come true. I always dreamed that I would one day get to speak to the Queen. That was something really, really special to me.

"And then when your work is recognised after you've put in so much, that really means a lot. It really means everything to all the staff here."

Aletheia Bligh-Flower, joint head of global health at the FCO, spoke during the videocall about collaborative work to develop a Covid-19 vaccine, support vulnerable countries and keep supply chains for PPE open.

She said the Queen had been particularly interested in how quickly the FCO had mobilised and knew all about the recent Global Vaccine Summit she had been working on.

Ms Bligh-Flower said: "She was very sharp. She said it was an extraordinary effort and she was very impressed by the incredible work we'd all done. It was really lovely to hear.

"She was very much in awe of how tech has played a huge role in all of this.

"It provides a moment of reflection really. You spend every day working at your kitchen table, and something like this makes you realise what you have achieved.

"It was really nice to have her help us reflect on the achievements of the last few months."

Asked about the unusual protocol of meeting the Queen over videolink, she joked the team had practised bowing their heads but 'just looked like we were nodding'.

"The Queen makes people feel very comfortable very quickly. Everyone was nervous but she put us all at ease and we were able to have a really nice conversation," she added.