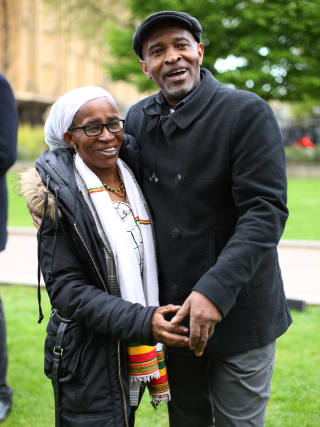 A Windrush campaigner has died one month after delivering a petition to Downing Street signed by more than 130,000 people calling for action to address the failings which led to the scandal.

Paulette Wilson died unexpectedly age 64, The Guardian and BBC reported, citing a statement from her daughter.

Natalie Barnes said she found her mother early on Thursday, and she appeared to have died in her sleep.

Ms Barnes said: “My mum was a fighter and she was ready to fight for anyone. She was an inspiration to many people. She was my heart and my soul and I loved her to pieces.”

Ms Wilson, from Wolverhampton, came to Britain from Jamaica aged 10 in the late 1960s.

She spent two years under the threat of deportation and spent some time in a detention centre before being told she could stay in the UK in 2017.

She told BBC Breakfast at the time that an apology from then-home secretary Amber Rudd was “a good thing” but added: “What about all the other people who were sent away before my case became big?”

She went on: “It’s just upsetting to think that an ordinary person like me could go through something like that. I’m still going through hell at the moment.

A report published in March found the Windrush scandal – which saw people with a right to live in the UK wrongfully detained or deported to the Caribbean – was “foreseeable and avoidable” with victims let down by “systemic operational failings” at the Home Office.

Official figures published in May revealed fewer than 5% of claims made under a compensation scheme for victims have been paid out.

Since the scandal emerged in 2018, more than 11,700 people have been given “some form of documentation”, Home Secretary Priti Patel told the House of Commons in March.