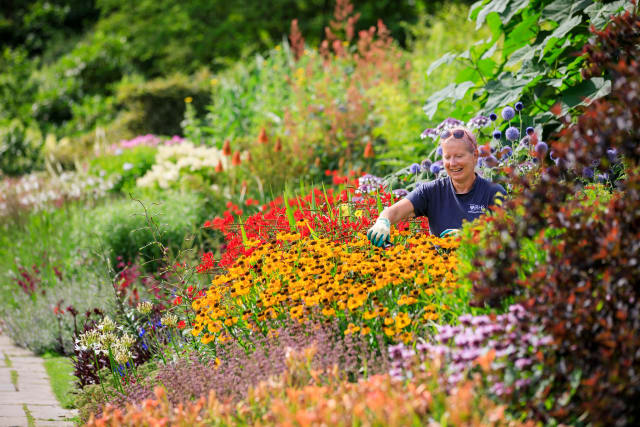 Gardens and green spaces are set to enjoy a spectacular – if brief – explosion of colour in the best summer flowering spectacle in years, experts said.

The Royal Horticultural Society (RHS) said this year’s weather has created optimal growing conditions for summer blooms, with the peak of two flowering seasons combining for a dramatic splash of colour.

A warm, wet winter followed by the sunniest May on record and a bout of rain in June has produced an exceptional crop of early and mid-summer flowers, the horticultural experts said.

Early blooms such as lilies, rhododendrons, irises, roses and hydrangeas have been abundant and had an extended season, while mid-summer flowers such as verbena, rudbeckia, heleniums and geraniums are now coming into their own.

But the best of the show could be over in days as the early summer flowers are likely to start going over next week, the RHS said.

Guy Barter, RHS chief horticulturalist, said: “A lack of frost and the light, warm start to the year meant growth was really good, helping produce big bulbs and lots of them.

“The sunniest May on record was followed by an unusually wet start to the summer, with England seeing 43% more rainfall last month than the June average, according to the Met Office.

“This combination of weather phenomena saw the sunshine bring early summer flowers into bloom earlier, while the welcome extra rain has helped stretch their season over a longer period.

“And all this combined has created the best crop of herbaceous plants seen in years.”

RHS Harlow Carr in Harrogate has benefited from steady temperatures, no drought and enough rain, according to curator Paul Cook.

He said: “Pink water lilies, white rhododendrons and pink, red and white roses are still going strong and at the same time there are masses of electric blue geraniums, yellow primulas and purple irises coming into flower.”

In Surrey, RHS Garden Wisley’s garden manager Peter Jones said: “There is so much to see.

“The prairie-style glasshouse borders are singing with more flowers than I’ve seen in years with beautiful reds, pinks, purples and blues, and in the South African meadow we are seeing the most brilliant spreads of kniphofia, the red hot poker.”

At RHS Hyde Hall in Essex, rudbeckia, lavender and agapanthus are having an unusually abundant year, according to experts.

Ian Le Gros, head of Hyde Hall, said: “Although no season is ever the same, ideal levels of sunlight, warm evenings and a spot of rain has meant we have an unusually good year for flowering.”