UK could learn from Scottish response to Covid-19, Sturgeon suggests 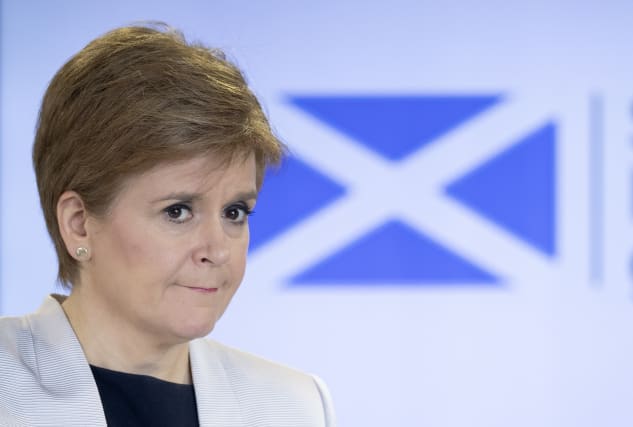 The UK could learn lessons from Scotland’s more cautious response to Covid-19, Nicola Sturgeon has said.

The Scottish First Minster spoke as different approaches to the pandemic north and south of the border appeared to highlight a growing divide between Scotland and England.

As Prime Minister Boris Johnson visited Scotland, Ms Sturgeon said: “Do I think there are things the UK Government could learn from Scotland? Yes I do.”

She added: “An approach that is very much driven by elimination I think is one thing they could learn.

“I would encourage the UK Government to do that because I think that would help all of the countries of the UK to drive the infection to the lowest possible level and put us into the strongest position going into winter.”

Professor Devi Sridhar, a public health expert from the University of Edinburgh, who has been advising the Scottish Government, tweeted on Wednesday she was “struggling to understand what the UK strategy is going into winter esp as still in early to mid part of pandemic”.

She suggested the approach adopted by Westminster might involve “pretending that Covid-19 is going to disappear and that past 6 months never happened”.

In England, figures from the Office for National Statistics show there have been 48,532 deaths where Covid-19 is mentioned on the death certificate.

In Scotland, the latest data from the National Records of Scotland put the coronavirus death toll at 4,193.

A YouGov poll at the end of May found 44% of adults in the UK thought Scotland has dealt better with the pandemic, with 14% saying England and 25% ranking their responses as the same.

The countries that make up the UK initially had a “four nations” response to the virus but there has been divergence since.

Ms Sturgeon, speaking on Thursday, said: “As of now, Scotland has a very low prevalence of this virus.

“We have had no deaths over the past week, we have only one in the past 15 days.

“And that is a much lower position of the state of the virus than other parts of the UK.

“Therefore, that says to me that what we are doing in Scotland is right and we should keep doing it.”

Ms Sturgeon took a more cautious approach to relaxing lockdown which, combined with her daily appearance at televised briefings to explain her strategy, may have resulted in strong approval ratings for the SNP leader.

A Panelbase poll in Scotland published earlier this month found wide backing for her handling of the coronavirus crisis, with the First Minister’s approval rating on the issue at 60 points.

In contrast, Boris Johnson’s approval rating on the crisis was minus 39 points.

The same poll also found support for Scottish independence at a record high of 54%.

Ms Sturgeon said her decisions during the pandemic have all been based on public health and not party politics.

But she has been at pains to stress when decisions taken by the Prime Minister do not apply in Scotland.

The Prime Minister has opened up the economy again sooner than Ms Sturgeon.

In England, the Government ditched the “stay home” message on May 10, with Mr Johnson instead urging people to “stay alert” to the dangers of Covid-19.

Businesses such as pubs, restaurants and hairdressers reopened from lockdown in England on July 4, dubbed “Super Saturday”.

In Scotland, it was almost two weeks later before people could enjoy a drink in a bar or a meal in a restaurant, with indoor hospitality only opening up again on July 15.

The Scottish Government also acted to make the wearing of face coverings in shops mandatory ahead of England.

While this measure comes into force in England from Friday, it was mandatory in Scotland from July 10.