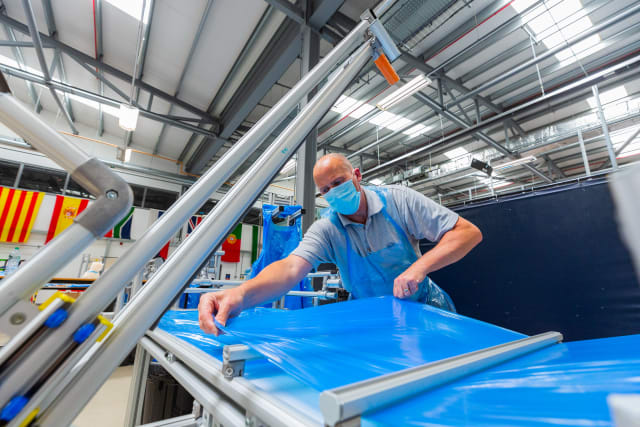 Car giant Nissan has handed over a project making protective aprons for frontline health and care workers to a prison.

Half a million aprons have been produced at the company’s factory in Sunderland over the past three months by a 57-strong team of volunteers.

They have been supplied to more than 100 healthcare trusts and care homes across the North East region.

Nissan announced that the project is now being handed over to HMP Northumberland.

Alan Johnson, Nissan’s vice president, manufacturing, said: “I’m extremely proud of the way the team at the plant answered the call to produce PPE for our frontline workers.

“Producing more than half a million aprons in such a short period of time demonstrates the skill, ingenuity and dedication of our team at the plant.”

With both vehicle production lines now back in operation, Nissan said it has donated equipment used to make the aprons to the jail in Acklington.

Once up and running, the prison team hope to initially produce 40,000 aprons each week.

Nissan began producing aprons in April this year following a request from the Royal College of Nursing and the Unite union for UK manufacturers to help with the unprecedented demand for PPE.

Samantha Pariser, director at HMP Northumberland, said: “Not only is it great to be giving back to local and regional NHS Trusts and care homes, but it’s also a fantastic opportunity for our residents within the establishment to learn new skills which will help them once they have been released, while also decreasing the likelihood of re-offending.”

The Sunderland plant has also helped supply visors to the NHS.