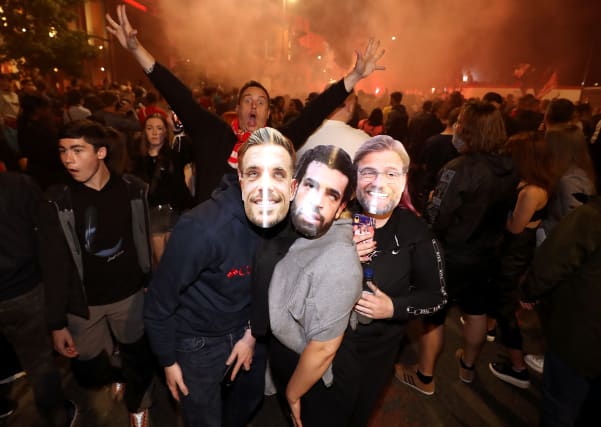 Nine people were arrested as thousands of Liverpool fans gathered outside Anfield to celebrate the club’s Premier League win, despite warnings to stay at home.

Merseyside Police introduced a 48-hour dispersal zone around the ground during the club’s match against Chelsea on Wednesday night but the force said only nine arrests were made, despite large numbers of supporters congregating outside the Kop end.

A heavy police presence was in force as the Reds celebrated a 5-3 victory and lifted the Premier League trophy for the first time in 30 years.

Ahead of the match, the club, council, police and supporters’ group Spirit of Shankly had urged people to celebrate from their homes.

Former player and manager Sir Kenny Dalglish tweeted: “Can everyone please respect the guidelines and enjoy the moment.

“This is a dress rehearsal for when we can all celebrate together safely.”

But supporters continued to arrive at the ground through the evening.

There were no fans inside the ground as the trophy presentation was made, but outside, in Walton Breck Road, crowds erupted into huge cheers as fireworks went off over Anfield.

It said: “We know people wanted to celebrate last night but social distancing is vital in helping us #staysafe, protecting each other, our families and the NHS.”

A spokeswoman for Merseyside Police said nine arrests were made throughout the night, mainly for drunk and disorderly and drink- or drug-driving offences, with three for affray or disorder.

The force said the dispersal zone, which allowed officers to ask those they suspected would cause crime or anti-social behaviour to leave the area, was set up in anticipation of large crowds following earlier incidents.

Thousands of supporters celebrated outside Anfield last month when the team’s first top-flight title in 30 years was confirmed and huge numbers gathered at the city’s Pier Head the following night, where police reported violent confrontations.

Superintendent Dave Charnock said: “We’re aware of the significant impact that anti-social behaviour can have on individuals and communities, and we will be targeting people we suspect of being involved in this type of behaviour in the area.

“To the vast majority of law-abiding members of the community and Liverpool fans, I just want to remind them that this order is not about bothering people going about their legitimate daily business.

“We would like to thank the vast majority of you who are adhering to the restrictions currently in place to protect the wider community as well as those who are continuing to keep an eye out for suspicious behaviour and reporting it to us.

“It has never been more important than now to ensure that we all follow Government advice to ensure the safety of those living in Merseyside.”