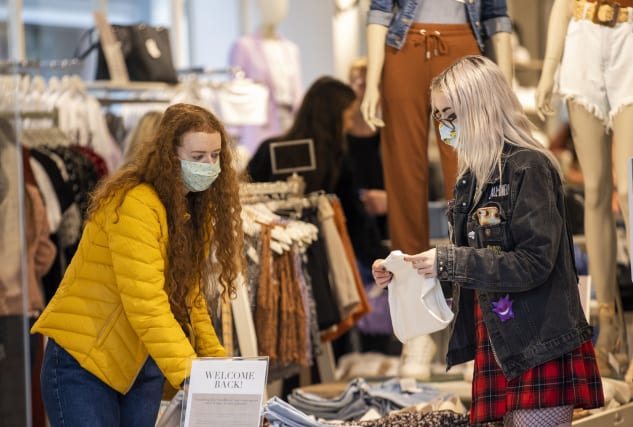 Executive ministers are set to discuss how to significantly increase the wearing of face coverings inside shops in Northern Ireland.

It is understood some ministers are reluctant to make face coverings mandatory inside retail outlets and would rather focus on persuading people to take the infection control measure.

Face coverings are already mandatory in shops in Scotland while they will become compulsory in England on Friday.

The issue is expected to be raised when Stormont ministers convene at Parliament Buildings at 2pm for the meeting of the devolved executive.

Health Minister Robin Swann acknowledged there were differences among both politicians and members of the business community.

Mr Swann, who said he favoured making coverings mandatory, said there was agreement on the need to increase the numbers wearing them.

“The question is how best do we actually achieve that,” he told BBC Radio Ulster.

“Is it by law and enforcement or is it by persuasion and a public campaign or a mixture of the two approaches?”

The executive meeting will see ministers undertake their three-week review of Northern Ireland’s coronavirus regulations and some further relaxations are anticipated.

Opening dates for indoor swimming pools and spa facilities are anticipated, as is a move to allow some spectators to watch outdoor sporting events.

Ministers are also set to consider when indoor bars that do not serve food can reopen.

The executive’s advice on travel overseas is due to be reviewed amid claims of mixed messaging by the administration.

While the executive has published a list of around 60 countries deemed safe for travel, the official guidance to the public remains that non-essential trips should be avoided.

The proposal was dismissed as a non-starter by her DUP partners in government.

Ahead of the executive meeting, major meat processing company Moy Park confirmed that a Covid-19 cluster had been identified at its plant in Ballymena.

On Thursday, the Public Health Agency announced that a total of 16 clusters have been identified in Northern Ireland since the start of contact tracing in late May.

A cluster is defined as two or more laboratory-confirmed cases among people associated with a workplace, school or similar setting within 14 days.

A total of 133 cases were associated with the 16 clusters, and six involved more than five cases.

A Moy Park spokeswoman said: “We have been informed that a very small number of our employees in the Ballymena site have tested positive for coronavirus.

“The individuals affected have been self-isolating on full pay in line with our Covid sick pay scheme and we are in contact with them to ensure they have the support they require.

“We continue to work closely with the Public Health Agency and other government agencies, following their advice and protocols.

“As coronavirus has spread across the communities in which we live, we are doing all that we can to help keep the virus out of our facilities and help prevent its spread.

“Staff safety is our number one priority and we continue to strictly follow all safeguarding procedures across our sites, such as enhanced cleaning and hygiene regimes, thermal temperature scanning, Perspex screens, additional PPE and social distancing measures.”