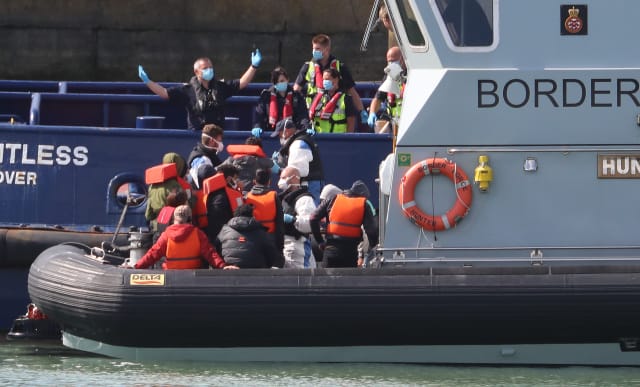 More migrants have tried to reach Britain by boat on Thursday amid a recent surge in crossing attempts.

A search and rescue operation has been under way off the UK coast as the coastguard and partners respond to “a number of incidents”.

In French waters four migrants were rescued after getting into difficulty in a boat off the coast of Sangatte near Calais.

Information on the number of people who may have reached UK shores on Thursday has not yet been released by the Home Office.

Meanwhile, the leader of Kent County Council, which takes in large numbers migrant children, has hit out at suggestions that young asylum seekers are being “demonised”.

HM Coastguard confirmed that it has coordinated search and rescue responses to “a number of incidents” off the coast of Kent.

A coastguard spokesperson said: “We are committed to safeguarding life around the seas and coastal areas of this country.

“HM Coastguard is only concerned with preservation of life, rescuing those in trouble and bringing them safely back to shore, where they will be handed over to the relevant partner emergency services or authorities.”

Numbers of migrants risking their lives to cross the English Channel have surged in the first seven months of 2020.

There has also been a visible spike in crossings in the last week as weather conditions have been good in the Dover Strait.

More than 3,000 migrants have now made it to the UK this year via the Channel, analysis from the PA news agency shows.

Among them are believed to be large numbers of children, many of whom are unaccompanied and are taken into the care of children’s services in Kent.

He responded: “No, absolutely not.

“We have rightly been highlighting the fact that this is presenting major issues for Kent in terms of both the financial pressure, the pressure on our children’s services, and have been making that case to Government, but that is absolutely not about demonisation.

“If you look at what we have done in dealing with, over a number of years actually, quite significant numbers of new arrivals we have a record there that we are proud of.”