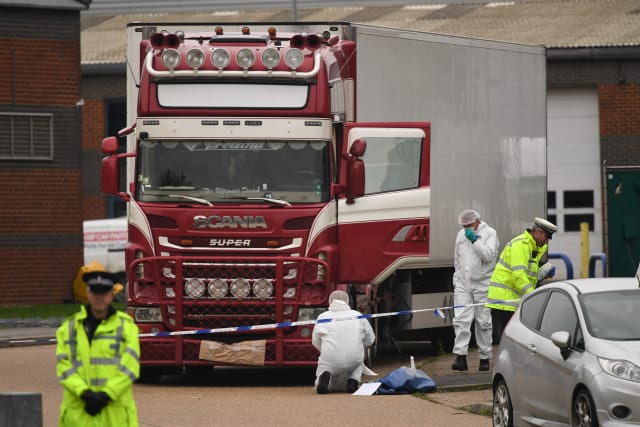 An Irish lorry driver has been extradited to the UK to face charges over the deaths of 39 Vietnamese migrants who were found in a container in Essex.

Eamonn Harrison, 23, of Mayobridge, County Down, Northern Ireland, is alleged to have driven the lorry trailer to the Belgian port of Zeebrugge before it sailed to Purfleet in England.

Harrison faces 39 counts of manslaughter and one count of conspiracy to assist unlawful immigration.

An Essex Police spokesman said: “We can confirm he is in our custody.

“We will release more information about proceedings when we are able.”

The bodies of the Vietnamese nationals were discovered on an industrial estate in Grays shortly after the container arrived in Purfleet on a ferry in the early hours of October 23 last year.

Among the men, women and children were 10 teenagers, two of them 15-year-old boys.

An inquest heard that their medical cause of death was asphyxia and hyperthermia – a lack of oxygen and overheating – in an enclosed space.

The lorry’s driver, Maurice Robinson, 25, who took the container from the port where it arrived in Essex, admitted 39 counts of manslaughter at the Old Bailey in April after previously pleading guilty to conspiracy to assist unlawful immigration.

Questions over use of RAF plane to monitor migrant crossings