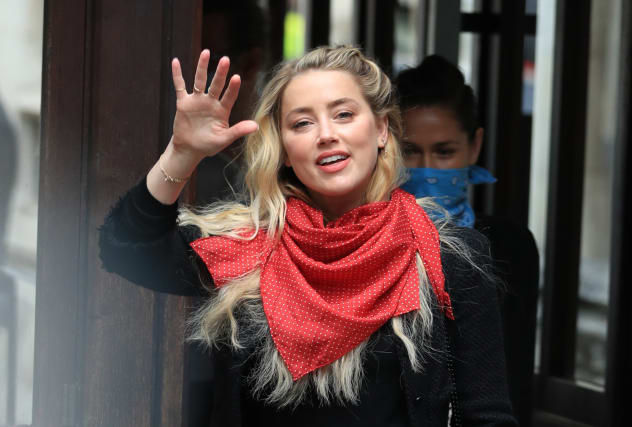 Johnny Depp is a “remarkable man” when he is “clean and sober” but the “other side of him was a monster”, Amber Heard has told the High Court.

In her fourth day in the witness box in her ex-husband’s libel case against The Sun newspaper, the Aquaman actress said she had been “so in love” with Mr Depp and had “always held out hope” that he would get clean.

The court has heard that in a series of text messages to her mother Paige in March 2013, Ms Heard, 34, described Mr Depp, 57, as “violent and crazy” and said: “I’m heartbroken that this is who I love.”

Mr Depp is suing the tabloid’s publisher, News Group Newspapers (NGN), and its executive editor Dan Wootton over an April 2018 article which labelled him a “wife beater”.

On Thursday, Ms Heard was questioned by Sasha Wass, representing NGN, who read out text messages the actress sent her mother on March 22 and 23, 2013.

In her first witness statement, Ms Heard claimed that in March 2013, Mr Depp hit her with the back of his hand, which caused her blood to hit the wall, after an argument about a painting by her ex-partner Tasya van Ree which was hanging in her house in Los Angeles. He denies this.

The actress initially said the incident took place on March 8 2013, but told the court she now considers the correct date of the “painting incident” to be March 22 2013.

Ms Wass told the court that in one text to her mother, Ms Heard wrote: “It’s terrible, mum. I don’t know what to do.”

Another read: “He’s nuts, mum. Violent and crazy. I’m heartbroken that this is who I love.”

In a third, she wrote: “I feel like I’m on a very fast train that’s about to explode, but I don’t want to jump off and leave my love behind.

“So I stay on the train, even though I know it’s about to explode.”

Ms Heard told the court: “I was so in love with Johnny at that time. We had had a wonderful year together where he was sober and clean and that is how I got to know him.

“And Johnny, when he was like that, (is) generous, loving, he is a remarkable man when he is like that.

“I loved him and I didn’t want to lose that… the other side of him was a monster, but I always held out hope that he would get clean and sober.”

As she read out the messages, Ms Wass told the court Ms Heard’s mother had suggested she informed her father, to which the actress replied: “I can’t tell dad.”

Ms Heard explained to the court: “I felt safe to tell my mother, but I didn’t know how my dad would react. I had never been in this situation before and I didn’t know if he would react violently… to Johnny.

Ms Wass also cited a series of texts between Ms Heard and Mr Depp’s then assistant Nathan Holmes, which were sent on March 22 2013.

Mr Depp is said to have been due on set at the time to film part of a documentary he was making about Rolling Stones guitarist Keith Richards.

Mr Holmes texted Ms Heard at around noon to say “on my way to get him”, to which Ms Heard replied: “Trying to wake him now.”

Ms Wass asked: “What was going on between noon… and about 6 o’clock that evening?”

Ms Heard replied: “Johnny refused to leave… (he was) snorting lines of cocaine, drinking whisky and he was saying we really need to work this out, he wanted to get to the bottom of it.

“He wanted me to admit that I was having an affair with, not only Tasya van Ree, my ex-partner, but also a gentleman I hardly knew… he had just gotten it in his mind that I had these affairs and he wouldn’t leave until I admitted it.”

Ms Heard will conclude her evidence about 14 allegations of domestic violence, which NGN relies on in its defence of an April 2018 article that called Mr Depp a “wife beater”, at the Royal Courts of Justice in London on Thursday.

Her sister Whitney Henriquez, who previously lived in one of five penthouses owned by Mr Depp in the Eastern Columbia Building in Los Angeles, is due to give evidence on Thursday afternoon.

Mr Depp is suing over the publication of an article on April 27 2018 with the headline: “Gone Potty: How can JK Rowling be ‘genuinely happy’ casting wife beater Johnny Depp in the new Fantastic Beasts film?”

The blockbuster case, the biggest English libel trial of the 21st century, is due to finish next week with closing submissions from both sides’ legal teams on Monday and Tuesday.