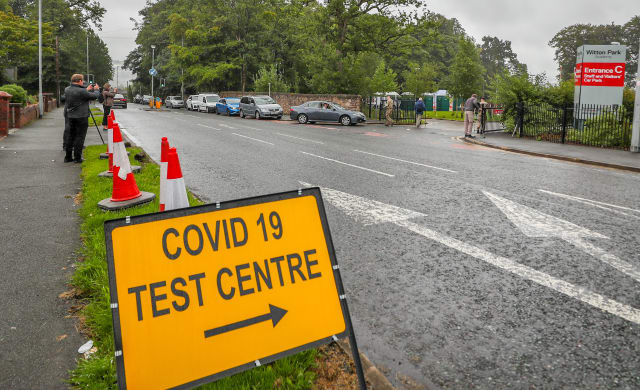 People living in a city or large town should be within a 30-minute walk of a Covid-19 testing site by the end of October as the Government prepares for a possible surge in winter cases.

At least a few hundred walk-in testing centres are to be established in towns and cities based on how easily people could push a buggy to one.

Those heading the NHS Test and Trace programme are also recruiting more people to work in local health protection teams as the system scales up to deal with any rise in cases in the colder months.

Experts including England’s chief medical officer Professor Chris Whitty have warned of a potential second wave of Covid-19 cases in the winter.

Prof Whitty told MPs on Tuesday: “A surge in winter is a really serious concern looking forward and where I spend most of my thinking time.”

People tend to stay indoors more in the colder months, where the virus transmits more easily, and ventilation is reduced as they keep their doors and windows closed.

The news comes as figures show NHS Test and Trace is failing to reach adequate numbers of people who may be ill in places with the highest infection rates.

The Government has pledged to publish regional data but has not done so yet.

Bradford Council told the PA news agency its data-sharing agreement with the Government means its figures on how many people have been traced cannot be shared with the media.

But it confirmed the district has seen a high number of contacts who cannot be traced by the national system.

Kirklees Council confirmed to PA that 77% of close contacts in its area had been traced in the most recent data.

This is below the 80% the Scientific Advisory Group for Emergencies (Sage) says need to be contacted within 48 hours if the system is to work.

The Guardian also reported that in Luton, which has the sixth highest infection rate in England, only 47% of at-risk people were contacted by NHS Test and Trace.

In Leicester, which remains under a partial lockdown, the rate was 65% – meaning more than 3,300 people were not reached by the national programme, the report said.

In Blackburn with Darwen the figure was 54%, and in Rochdale it was 66%.

Lisa McNally, director of public health at Sandwell council in the West Midlands, which has the ninth highest infection rate in the country, said only 40% of positive coronavirus cases in her area had been contacted by the national system last week.

The most recent NHS Test and Trace data, published on Thursday, shows Prime Minister Boris Johnson’s pledge to have all in-person tests back within 24 hours is not being met.

The proportion of people receiving their Covid-19 result within 24 hours of being tested at a regional site or mobile testing unit – a so-called “in-person” test – has fallen for the second week in a row.

Since the launch of Test and Trace, 169,546 close contacts of people who have tested positive for Covid-19 have been reached through the system and asked to self-isolate.

The weekly figures show 77.9% of close contacts were reached in the week ending July 15, up from 72% in the previous week, but down on the 90.7% reached in the first week of Test and Trace.