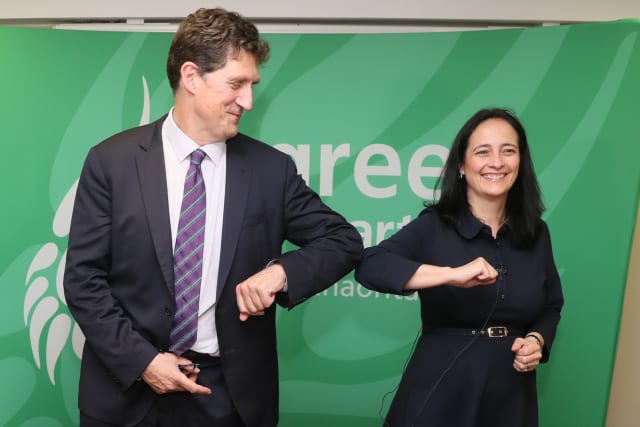 Green Party members have been asked to stick with the party and its leader Eamon Ryan after he was re-elected by a narrow margin.

Green Party leader Eamon Ryan has won the leadership contest, seeing off the challenge of Deputy leader Catherine Martin by a narrow majority.

The narrow margin of victory was a surprise to members and was acknowledged by Mr Ryan in his speech after the result was announced.

“It was a really close result. There is no two ways about that. The result could have gone either way. I will reflect on that,” he said.

“Congratulations to Catherine, she easily could have won it, it was that close.”

Just under two thirds of Green Party members had voted in the leadership election when the deadline for polling passed at 5.30pm on Wednesday.

He said: “There are tough times in the country at the minute.

“We have a responsibility to serve all our people.”

Deputy leader Catherine Martin urged people to stick with the party as it goes through a difficult time.

She said: “I’m asking people to stick with us, stick with Eamon as the re-elected leader and me as the deputy leader…. stick with us on the new journey that we are on.”

She said the party will have to examine why several party members have left in recent weeks.

It comes as high profile Green Party member Saoirse McHugh and others left, citing disillusionment with the party for entering into government with centre right parties, Fianna Fail and Fine Gael.

Ms Martin said: “We have to sit down and look at why we are losing good people and what we can do to change that.

“There was diversity of opinion about going into coalition and about the programme for Government and that has been expressed but I believe we need to welcome those differences of opinion and be a welcoming space.

“I think it is good for us as a party to challenge each other on this new journey that we are on and maybe we need to reform the party is some way to show that we are open to all voices and that they are welcome, appreciated and valued and show there is a commitment to climate and social justice.”

Ms Martin said: “In relation to members that have left, I think it is very important that we engage with them.

“I’ll be inviting them to talk to us and I’ll be asking them to stick with us.”

She said the party’s membership has “exploded” in the past year and a structural review of the party needs to be carried out.

“During the hustings, concerns were expressed in a very respectful way and it will continue, just because the leadership contest is over, that does not mean that the journey is over for the party and I think we should continue engagement with the membership.”

The Greens helped form a new three-way coalition Government in Dublin last month and have forced measures to combat global warming and sustainable transport into the spotlight.

The two candidates have held their party roles since 2011.

The party decided to enter Government last month after a divisive internal debate following its best ever result in February’s inconclusive General Election.