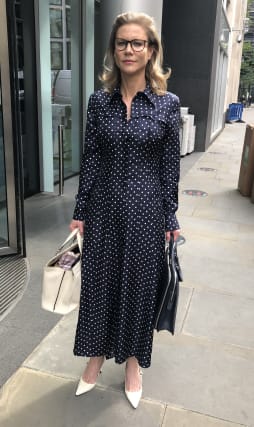 A former Barclays boss has apologised after a judge heard how he had called a businesswoman embroiled in a £1.6 billion High Court battle with the bank “thick as shit”.

Stephen Jones, who worked in Barclays’ investment banking division, made the comment about Amanda Staveley in a telephone call with another then-bank boss in October 2008, Mr Justice Waksman was told.

Mr Jones had also, in a separate October 2008 call with the same colleague, referred to Ms Staveley’s links with Manchester City owner Sheikh Mansour, saying: “Whether she’s sleeping with him or not I couldn’t tell you … ”

Detail of the calls emerged at a High Court trial in London on Thursday.

A lawyer, instructed by Ms Staveley, who in recent months has been involved in brokering a deal which could see a Saudi consortium take control of Newcastle United FC, told the judge that she had accepted an apology made privately.

Mr Jones also, outside court, issued a separate apology and said his comments had been “wholly inappropriate”.

He had left Barclays nearly a decade ago, and went on to become chief executive of financial services trade association UK Finance.

Mr Jones stepped down from that role earlier this summer, following the start of the Barclays trial.

Ms Staveley, 47, has made complaints about the behaviour of Barclays bosses when negotiating investment deals during the 2008 financial crisis.

She says Barclays agreed to provide an unsecured £2 billion loan to Qatari investors, but the loan was “concealed” from the market, shareholders and PCP Capital Partners, a private equity firm she runs.

Barclays says PCP’s claim is made “of sand” and should be dismissed.

UK Finance chairman Bob Wigley had said in a statement: “Stephen has rightly acknowledged that the comments he made in 2008 were inappropriate and do not meet the standards expected of leaders in our industry.

“He has characteristically taken a difficult personal decision in the interest of UK Finance.”

Speaking outside court on Thursday, a spokesman for Mr Jones said: “Stephen has been very clear his comments were wholly inappropriate and do not meet the standards of language and behaviour we rightly expect.

“He regrets making these comments and has not sought to defend them and will not seek to do so. He is and always has been a strong advocate for diversity in all respects.

“He was very grateful and touched that Amanda Staveley has accepted his apology.

“She has also told him she was saddened to know he had resigned from UK Finance as she thought he was doing an excellent job.”