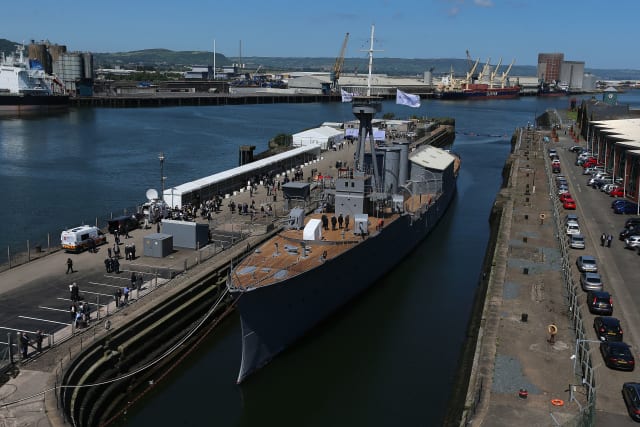 The last surviving ship from the First World War’s most famous naval battle is to remain closed to visitors amid a stand-off over funding.

The National Museum of the Royal Navy (NMRN) said HMS Caroline, a Battle of Jutland veteran that has been turned into a Belfast tourist attraction, will not open this year after a failure to renew a financial support deal with Stormont.

The Department of Economy is assessing the future viability of the floating museum after acknowledging that visitor numbers since it was fully opened to the public in 2018 had been “disappointing”.

The NMRN closed Caroline and other visitor facilities in Portsmouth, Gosport, Hartlepool and Yeovilton at the outbreak of the coronavirus pandemic.

It says the loss of ticketing revenue during lockdown has left it with a £6.35 million budget shortfall.

While the Treasury has offered the museum an emergency grant to reopen its sites in England, in Northern Ireland its funding arrangement is with the devolved executive.

Under a previous operating agreement, the NMRN works to maximise income to cover the costs of running the attraction, with the powersharing executive making up any shortfall.

That agreement with the Department of Economy (DfE) expired at the end of June and has not been renewed.

The department, which has now assumed responsibility for operating the vessel, said NMRN had asked to change the terms of any new operational model only three weeks before the contract was due to expire, leaving it with insufficient time to formulate a new deal.

Dominic Tweddle, director general for the NMRN, warned that staff who work on the attraction would face redundancy if the department did not change course.

“This is a desperate situation for the museum and especially for our incredibly dedicated team at HMS Caroline,” he said.

“Since Covid-19 hit in March, our trustees and I have been working tirelessly to financially secure all of our sites.

“The support which was confirmed by HM Treasury this week was a welcome relief, but it does not alter our position in Belfast.

“We have liaised exhaustively with DfE and continue to do so in the hope that we could still reopen HMS Caroline alongside our sites across the UK.

“We are fortunate that we have a few weeks of being able to support staff’s salaries under the Coronavirus Job Retention Scheme whilst we continue to fight to secure the future of the ship and its team.

“However, if we are not able to sway DfE from its current position then HMS Caroline will not reopen until 2021 and those jobs will have to be made redundant”.

Mr Tweddle said, while many other national museums receive 60-80% of their funding from the state, his organisation received less than 20%.

“I simply cannot see why the historic ships and collections we care for, are not treated with the same significance as those in the care of our National Museum peers,” he said.

“Is our naval history not of equal value?”

A Department for the Economy spokesman said it had made a “substantial interim payment” to help with cash flow issues during lockdown.

The spokesman said the department was first informed of the attraction’s operational deficits in October 2018 and claimed NMRN has still been unable to verify the total sum involved.

“This was unexpected as the original business plan indicated no deficits would occur on the project until 2022/23,” he added.

“The Department has deployed external consultants to fully establish and confirm the totality of this deficit and this work is still ongoing.

The department said attracting visitors to the ship was key to its future.

“Visitor numbers are key to the sustainability of this attraction, which is reliant on ticket sales and spend at the cafe or shop,” said the spokesman.

“However, visitor numbers have been disappointing to date, resulting in operational deficits.

“The department has been concerned about these deficits for some time and has been working closely with NMRN, who also act as operators, to attempt to make the attraction more profitable, reduce deficits and ensure greater value for the use of public funds.

The statement continued: “The department will utilise this period of closure to fully and thoroughly examine in detail all options and costs for the future of the attraction, taking into account how the tourism sector in Northern Ireland is likely to recover in the short, medium and long term.

“The department has also advised NMRN that it will meet agreed costs associated with this period of temporary closure, which include salary costs of two members of staff who will be maintaining and overseeing the ship during this time.

“The remainder of the HMSC staff are currently on furlough through the Job Retention Scheme.”

A light cruiser, weighing 3,750 tons and measuring 446ft (136m), HMS Caroline was part of the screening force which sailed out ahead of the Royal Navy’s Grand Fleet during the Battle of Jutland in 1916 to establish the position of the German battleships.

Both sides suffered heavy casualties in what was the most significant clash between battleships during the First World War.

Britain and Germany both claimed victory.

Six years after the war ended, HMS Caroline was moved from Portsmouth to Belfast to become a training vessel for local Royal Navy Reserves.

Most of the rest of the fleet was decommissioned and broken up.

HMS Caroline performed its function as a drill ship up until 2011, apart from during the Second World War when it was used as an operations headquarters for the efforts to protect the Atlantic convoys from German U-Boats.

It was restored with the help of lottery funding and financial support from Stormont.