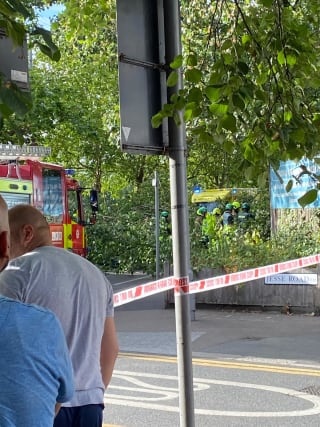 Three people have been taken to hospital after a tree collapsed on them in Leyton, east London.

The tree fell on to the junction between Leyton High Road and Jesse Road at around 6pm on Thursday evening, crushing three pedestrians.

The London Ambulance dispatched two crews, treated three people at the scene and took all of them to hospital.

Harjit Gill, who lives in the area, told the PA news agency he passed the area while out for a run.

“I saw someone under the tree on the pavement with a bandage on his head, the fire brigade arrived on the scene with the police and was told to move on quickly,” said Mr Gill, who works in financial regulation.

“The guy’s head was gruesome.

“The scene was of utter bemusement but gathered it was serious as the police shut the road off and were quite blunt in clearing the scene.”

Another local resident told PA the people beneath the tree appeared trapped, however the Metropolitan Police said none were trapped.

The road has since reopened and the tree has been removed.