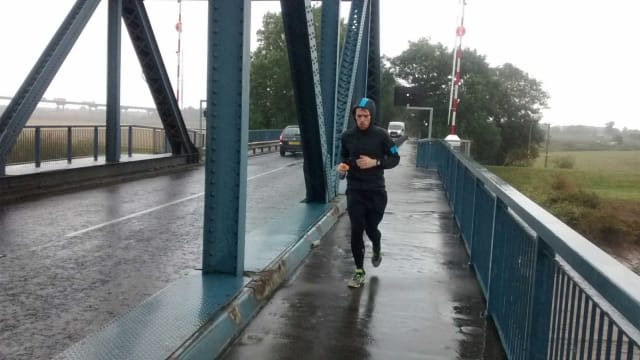 A charity runner who vowed to complete a marathon for every league win Wigan gained this season admits the challenge has become far bigger than he imagined.

Chris Devine, 33, is now committed to running 15 charity marathons, all in the month of September, after the Latics finished the season in storming form as they fought to stave off relegation from the Championship.

Their valiant run ultimately proved unsuccessful as a 12-point deduction for going into administration earlier this month saw them relegated by two points, but it was a remarkable effort given they had managed just five victories after 28 games.

“I figured at that point it might get to 11 or 12 at a push, maybe 13 absolute maximum,” Mr Devine told the PA news agency. “It’s gone past that, which is not ideal.

“But it’s good in that it’s probably led a few people to think it’s a crazier challenge so that should hopefully lead to a bit more sponsorship.”

While the number of marathons he now has to run is a little daunting, Wigan’s good form has helped to gain Mr Devine more attention, which he hopes will lead to more sponsorship.

“I’ve definitely noticed a lot more interaction from Wigan fans either side of the break when they’ve been winning loads of games,” he said.

“It seems to have caught the imagination a bit more because I think earlier in the season they were winning so infrequently that it didn’t seem like it was going to be much of a challenge.”

Wigan would have been comfortably safe were it not the points deduction, which the club is scheduled to appeal against later this month, but as it stands they will play in League One next season.

Mr Devine supports Stoke, who were themselves battling Wigan for survival for much of the season, but he is sad to see what has happened to a club he has developed a strong affinity with.

“It’s heartbreaking for the club and the fans and I’m very sympathetic to the situation they’re in,” he said.

Mr Devine’s original plan was to run his marathons in June, but because of the unscheduled mid-season break he will now be undertaking the challenge in September.

Fitting so many marathons into one month will mean running every Saturday and Sunday as well as taking days off work – he is a content editor for the R&A – and he believes 16 would be “the absolute maximum” he could have managed, both physically and logistically.

“My entire month will be working, running and whinging, probably,” he said.

“I’ve got a plan but it’s a bit like the boxing quote of everyone’s got a plan until they get punched in the face – there’s no telling how I’ll feel after two marathons, after five marathons, so I’m well aware that any plan will probably get moved about.”

Whatever happens, he is determined not to give up.

“I don’t know what the odds of me surviving September are at this stage,” he said.

“I’ve said ‘I’ll do them or die trying’ but unfortunately the odds on dying trying have reduced with every win,” he said.

To donate, go to uk.virginmoneygiving.com/ChrisDevineLaticsMarathons