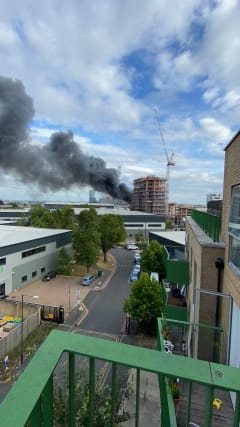 A fire visible for miles around in west London was being tackled by around 80 firefighters on Thursday evening.

The London Fire Brigade said it had over 50 calls about the blaze and 15 fire engines attended the scene on Minerva Road in Park Royal.

The fire service said the blaze was affecting a bakery and restaurant, but there have been no reported injuries.

It was initially reported the fire was taking place in a shop which had flats above it, but the fire service later said no residential properties were involved.

"There is a lot of thick black smoke so please close your doors & windows if you are nearby," tweeted the fire service.

It added the "complex and severe" fire meant firefighters would be at the scene throughout Thursday night.

Chris Shaw, a 38-year-old sound and light engineer, told the PA news agency: "I live five minutes from there and I was at home and saw the plumes of smoke which were huge.

"Only 20 mins before I was at the post office next to the fire so I was worried about the owners so took a walk over to make sure they were safe."