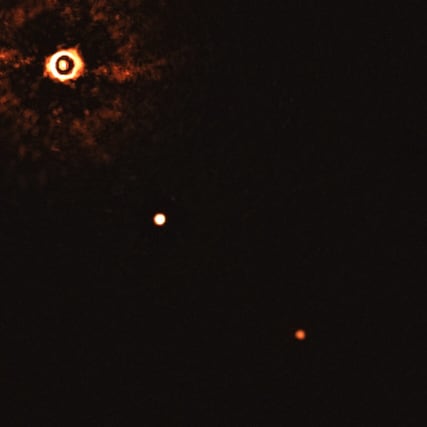 Astronomers say they have captured the first ever image of a young, Sun-like star alongside two giant exoplanets, located about 300 light years away.

Glimpses of systems with multiple exoplanets are extremely rare and scientists say they have never directly observed more than one planet orbiting a star similar to the Sun before.

The European Southern Observatory’s Very Large Telescope (ESO’s VLT) took the snap, which may help unlock answers about how planets formed and evolved around our own Sun.

“Even though astronomers have indirectly detected thousands of planets in our galaxy, only a tiny fraction of these exoplanets have been directly imaged,” said Professor Matthew Kenworthy from Leiden University, who co-authored the research.

“Direct observations are important in the search for environments that can support life.”

The image shows two bright, giant exoplanets orbiting their star at distances of 160 and about 320 times the Earth-Sun distance, respectively.

“This discovery is a snapshot of an environment that is very similar to our Solar System, but at a much earlier stage of its evolution,” said Alexander Bohn, a PhD student at Leiden University and lead researcher, whose findings are published in Astrophysical Journal Letters.

“The possibility that future instruments, such as those available on the ELT (Extremely Large Telescope), will be able to detect even lower-mass planets around this star marks an important milestone in understanding multi-planet systems, with potential implications for the history of our own solar system.”