Royal residences given spring clean ahead of visitors’ return 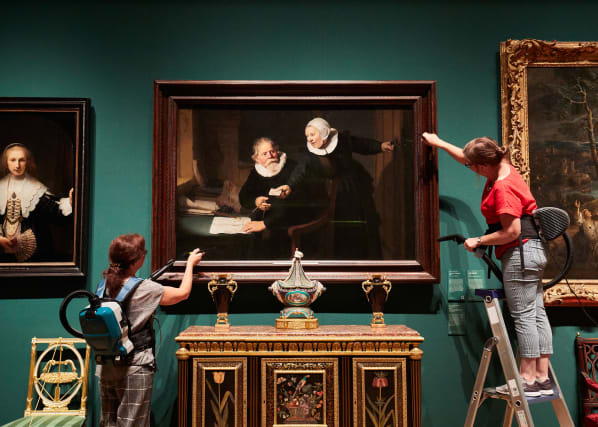 Final preparations are being put in place ahead of the reopening of the Queen’s official residences to the public on Thursday.

Windsor Castle, the Palace of Holyroodhouse, the Royal Mews at Buckingham Palace, and The Queen’s Galleries in London and Edinburgh are welcoming tourists back through their doors once again after closing during lockdown.

Royal Collection staff have been carefully dusting some of the precious artworks and national heirlooms, including the Diamond Diadem which the Queen wears to and from the State Opening of Parliament, ready for visitors.

Set with 1,333 diamonds, the circlet was designed for George IV’s coronation and forms part of the George IV: Art & Spectacle exhibition at The Queen’s Gallery, Buckingham Palace.

Rembrandt’s painting The Shipbuilder And His Wife was also attended to by staff, carrying delicate brushes and wearing vacuum cleaner backpacks.

The ornate Gold State Coach, which has been used at every coronation since George IV’s including the Queen’s in 1953 and for other celebrations such as the Golden Jubilee in 2002, was cleaned for the grand reopening.

Ahead of Thursday, a friends and family day was held at Windsor with attendees exploring the magnificent St George’s Hall, the largest room on the castle visitor route.

The Queen’s horses were also led out of their transportation boxes and back to the Royal Mews in London.

They were relocated to stables in Windsor, Sandringham and Hampton Court during lockdown.

Among the pieces going on show at Windsor are a series of “pantomime pictures” commissioned to cover the bare walls in the Waterloo Chamber during the Second World War.

Princess Elizabeth and her sister Princess Margaret staged pantomimes in the chamber to raise money for the Royal Household Wool Fund, which supplied yarn to make comforters for soldiers fighting on the front.

The room’s original decorations – portraits by Sir Thomas Lawrence – were removed from their frames because of the threat of bomb damage.

Teenage evacuee and part-time art student Claude Whatham was asked to recreate fairy-tale characters on rolls of wallpaper to adorn the walls instead.

After the war, the portraits by Sir Thomas were returned to the Chamber, and the 16 pantomime pictures – which feature Little Red Riding Hood and Aladdin among others – were hidden beneath them.

They have been revealed just once since the war, following the Windsor Castle fire of 1992.

During lockdown, Sir Thomas’s paintings were removed again for essential maintenance work, and the pantomime pictures stand in their place.

Whatham eventually became a TV and film director, whose best known works included Swallows And Amazons in 1974 and Cider With Rosie in 1971.

At Holyroodhouse in Edinburgh, the grand ceiling painting The Apothesosis Of Hercules by Dutch artists Jacob Jacobsz de Wet II was removed by conservation staff from the King’s Bedchamber.

Its surface has been cleaned and retouched and work carried out to stabilise its frame.

The ceiling painting is now back in place for the public to view on the palace’s visitor route.

The palaces, galleries and Royal Collection Trust shops will open five days a week for the foreseeable future, remaining closed on Tuesdays and Wednesdays.

Timed tickets bought online in advance at www.rct.uk/tickets have been introduced in order to manage visitor numbers.

One-way routes, hand-sanitiser stations, perspex screens at tills and payment by card only are among some of the safety measures put in place.

Buckingham Palace, however, will not be welcoming visitors for its annual summer opening, after the popular tours were cancelled because of the pandemic.

The Royal Collection Trust maintains and displays the large collection of royal artefacts from artwork to furniture held in trust by the Queen for her heirs and the nation.

But the charity is seeking voluntary redundancies among its 650 staff and has taken out a £22 million loan after predicting losses of £30 million over the next year because of the closure of its sites during the pandemic.