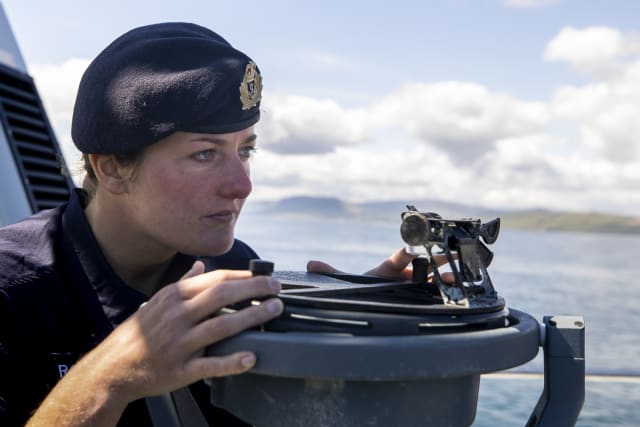 The coronavirus pandemic has thrown up logistical challenges on board a Royal Navy warship which trains the naval commanders of the future.

Social-distancing demands have forced training which would normally take place on board HMS Biter to go virtual.

They have been in Northern Ireland waters this week on a training operation which also saw them off the west coast of Scotland.

At just over 20 metres long, they are among the smallest vessels in the Navy’s fleet.

HMS Biter commanding officer Rebecca Anderson said at the start of the lockdown in March, they were in Wick on the north coast of Scotland and had to navigate around England to return to their base port of Liverpool.

“The Caledonian canal at the time was closed, and the prevailing weather during April meant I could not achieve a cross over the top so I had to go all the way round the country,” she told the PA news agency.

“So from Wick all the way down the east coast, down the bottom, stop in Portsmouth and then around to the west coast. It was a very long transit.

“This vessel has done 4,000 nautical miles this year alone which is quite spectacular for the size and range.

“One of my main functions is to train the officers of the future at universities, my problem for that is that I can’t have them on board due to social-distancing guidelines. Normally I would have up to 10 students about at a time when I’m on a transit to deliver navigational training.

“So we’re having to go virtual as a lot of the world is at the moment, trying to do that training on a virtual platform, social media and using video conferencing apps to achieve navigational training.”

The trio of ships have been in Northern Ireland’s waters this week as part of an operational training deployment.

“The scenery is phenomenal in this part of the world and the weather has been on our side which always helps,” Lieutenant Anderson said.

“It’s a completely different operating area for us which is really interesting, it throws up different sets of navigational challenges for my team, operating in areas they are not familiar with.”

The 27-year-old from Manchester has been in the Royal Navy for five years.

She described the opportunity of commanding a warship so early in her career as unusual and fantastic.

“My five years makes me quite junior, but what this gives me a taste of command, it shows me what responsibility of a Royal Navy vessel is like. It is on a smaller scale but the same principles are there, so everything I do on this ship is replicated on a mini scale to a frigate or a destroyer,” she said.

“It is a really good opportunity for a junior warfare officer to get some exposure in command so early on in their career.

“In terms of being a woman in command, a lot of progress has been made in the Navy particularly in terms of diversifying through the ranks. I am not the first by any stretch and I certainly won’t be the last. There are a lot of women coming through.

“My gender has never played a role in how I am received by my team.”

HMS Biter is now set to return to its base port in Liverpool.

“We have been at sea continuously since January so the guys are getting a well deserved rest,” she said, adding a transit of the Manchester shipping canal is on her bucket list.