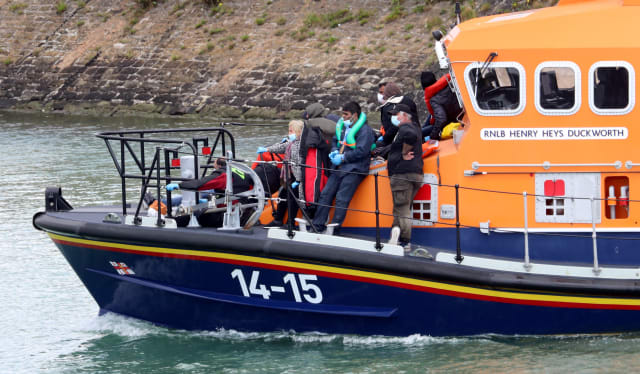 More than 150 migrants were brought ashore in six hours after crossing the Channel to the UK in small boats.

At least three young children were among the group, pictures showed.

It takes the total number of migrants who have reached the UK so far this year to more than 3,000, analysis by the PA news agency shows.

Last week more than 350 people made the crossing, with 137 on Friday alone.

Some 180 reached the UK on July 12 – the current single day record for the year.

More attempted crossings were thought to be under way on Wednesday morning.

The latest wave of incidents comes amid a bout of warm weather and calm waters.

On Monday, it emerged that hundreds of boats believed to have been used in past attempts are being stored at a high-security government compound in Dover.

The discarded dinghies and rowing boats, which were discovered piled on top of one another, were pictured at a warehouse storage facility on an industrial estate in the Whitfield area of the Kent port town.

The boats are stored to use as evidence in people-smuggler prosecutions, the Home Office said.

Despite agreeing to launch a Franco-British intelligence cell, it emerged that the countries are embroiled in a row on tactics used to tackle the crossings crisis – particular whether maritime law permits French authorities to intercept boats at sea and take them back to the Continent.

Earlier this month, Home Secretary Priti Patel told PA that no new target date has been set for when the crossings would become an “infrequent phenomenon”.

Less than a year ago she vowed “urgent action” on the dangerous journeys, aiming for them to be virtually eradicated by spring this year.

Charities have repeatedly insisted that the only way to tackle the crossings is by committing to providing migrants with safe, legal routes of passage for those seeking sanctuary in the UK.

The Home Office has said migrants should be claiming asylum in the first safe European country they arrive in.

Brexit briefing: 141 days until the end of the transition period