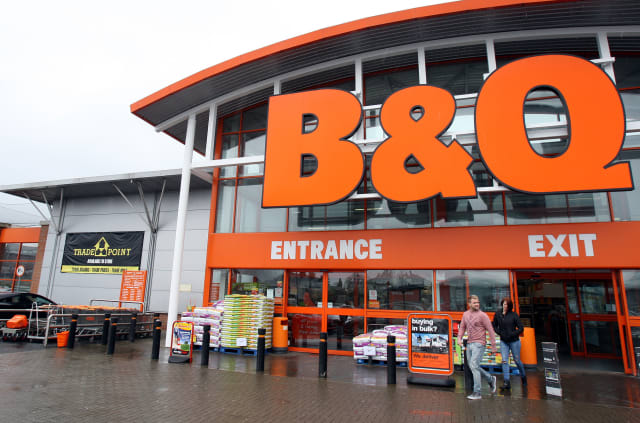 Surging demand for DIY products amid the coronavirus lockdown is set to see B&Q owner Kingfisher deliver rising half-year profits as it revealed that online sales have more than tripled.

The retailer said group like-for-like sales rose 21.6% in its second quarter so far to July 18, boosted by cost-cutting as well as soaring online trading and the phased reopening of stores in France and the UK since mid-April.

Group online sales rocketed more than 200% in May and June amid the trend for home improvements as lockdowns across Europe forced households to stay at home.

Kingfisher said like-for-like sales across the UK and Ireland – where it also owns Screwfix – jumped 25.9% last month, while sales leapt 33% in France, where it trades as Castorama and Brico Depot.

Sales have continued to remain strong in July, with UK and Ireland like-for-like growth of 19.6% in the week to July 18 and group online growth of 183.3%.

Kingfisher said: “Based on the strong sales seen to date in the second quarter, combined with cost reductions benefiting the first half, the company anticipates its half-year adjusted pre-tax profit to be ahead of prior year.”

But it held off from giving guidance on the full-year out-turn, with group year-to-date same-store sales still showing the impact of the lockdown, down 3.7%.

It added: “While we are entering the second half with a favourable trading backdrop, second-half visibility remains low given uncertainty around Covid-19 and the wider economic outlook.”

The update comes after Kingfisher saw pre-tax profits fall to £103 million for the year ending January 31, compared with £300 million the previous year, mainly due to a £441 million hit in exceptional costs, though sales fell 1.5% to £11.5 billion.