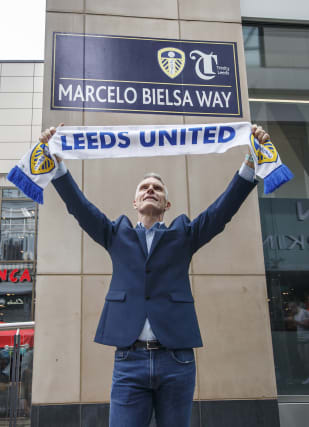 People in Leeds are “walking an inch taller” following their club’s promotion to the Premier League, according to a shopping centre manager who has renamed a street in honour of the victorious manager.

The Trinity Leeds centre, in the heart of the city, has been temporarily renamed Trinity Leeds United following the club’s promotion last week and subsequent sealing of the Championship title.

The centre has also renamed Trinity Walk, one of the the routes into the complex, after Leeds United’s Argentinian manager, Marcelo Bielsa.

Standing in Marcelo Bielsa Way, centre director David Maddison said: “We decided this was the right thing to do, something we could honour the football club and the manager himself with, and would be a permanent reminder to the people of Leeds that the great man has taken us back to where we should be, which is the Premier League.”

Asked about the mood in the centre, Mr Maddison said: “Absolutely incredible. You can literally see people walking an inch taller, feeling prouder.

“People are wearing the shirt, people are talking about the club.

“All in all, a fantastic experience for everyone.”

Mr Maddison was optimistic about Leeds’s chances next season.

He said: “I see no reason at all why they can’t hit the heights soon and go for the top four and get a Champions League spot. I think that’s a realistic target for the club.