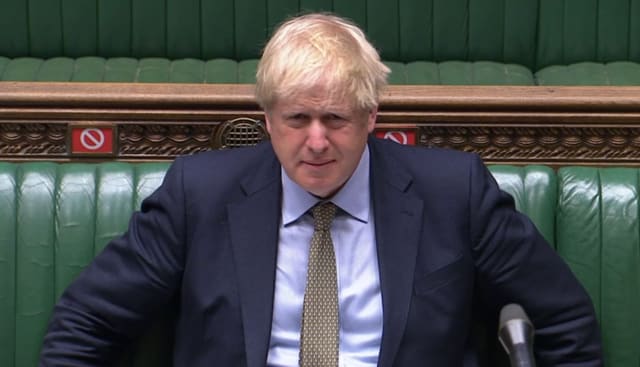 Boris Johnson promised new laws to help tackle the threat posed by Russia as he faced accusations the Government was slow to respond and had “sat on” a highly critical report.

The Prime Minister insisted that the UK “leads the world in caution about Russian interference” after the Intelligence and Security Committee (ISC) accused the Government of badly underestimating the scale and nature of Moscow’s activities.

Labour leader Sir Keir Starmer said ministers were aware of the need to update the law to give greater powers to the security and intelligence agencies 18 months ago but had failed to act.

“The Prime Minister sat on this report for 10 months and failed to plug a gap in our laws on national security for a year-and-a-half,” Sir Keir said.

He told Mr Johnson: “The Government has taken its eye off the ball – arguably it wasn’t even on the pitch.”

At Prime Minister’s questions, Mr Johnson said: “This Government is bringing forward legislation, not only a new Espionage Act, not only new laws to protect against theft of our intellectual property but also a Magnitsky Act directly to counter individuals in Russia or elsewhere who transgress human rights.”

He said there was “no country in the Western world that is more vigilant in protecting the interests of this country or the international community from Russian interference”.

The ISC said the Government was slow to recognise the potential threat posed by Russia to British democratic processes and did not properly consider whether Moscow could interfere in the Brexit referendum until after the event.

The ISC report concluded the UK only belatedly realised the threat to political processes despite alarm bells ringing over the 2014 Scottish independence referendum.

Mr Johnson – the frontman for the Vote Leave campaign – claimed critics of the Government’s response were disgruntled Remainers “who have seized on this report to try to give the impression that Russian interference was somehow responsible for Brexit”.

The report’s publication was delayed by Mr Johnson’s decision to call a general election and then the slow process of establishing a new ISC in the current Parliament.

As part of a package of measures to update security laws, ministers are considering a US-style law requiring people working on behalf of foreign states to formally register their activities.

The Government has already promised legislation to provide the security services and law enforcement agencies with “the tools they need” to disrupt hostile action.

The Law Commission is reviewing the Official Secrets Act, which was branded “out of date” by the ISC in its report.

The then director of MI5, Sir Andrew Parker, told the ISC that gaps in the laws meant it was “not an offence in any sense to be a covert agent of the Russian intelligence services” unless you actually “acquire damaging secrets and give them to your masters”.

Cabinet Minister Grant Shapps told BBC Radio 4’s Today: “What that does is make it easier if someone is then found and they have failed to register to, for example, extradite them.”

The US Foreign Agents Registration Act covers activities including lobbying and public relations for overseas states, and Australia has a similar register.

The ISC said the intelligence agencies and Government departments treated the issue of potential Russian interference in British democratic processes as a “hot potato”, with nobody effectively tackling the problem.

The Government said there was “no evidence” of successful Russian interference in the Brexit vote but the committee – which oversees the work of Britain’s spies – suggested there was no proper investigation.

Former national security adviser Lord Ricketts told Today it was a “serious failure” not to investigate Russian influence during the referendum.

“Even after the revelations of the massive Russian attack on the US Democratic Party, which came a month or two after the referendum, the government of the day didn’t ask for a rapid assessment of whether there had been any similar effort to hack and leak documents and try to influence the referendum campaign, and I think that was a serious failure,” he said.

Lord Ricketts said MI5 had prioritised counter-terrorism efforts over hostile state activity since the September 11 attacks in the US in 2001.

He argued security services did not need “a lot of further powers”, arguing: “By all means we can strengthen the powers of the intelligence agencies to fight espionage in the UK and foreign agents, but I think the story of the ISC report is more about using the powers they already have and being alert and being prepared to have investigations into what’s gone on rather than necessarily needing a lot of further powers.”