Boris Johnson’s dramatic year in No 10 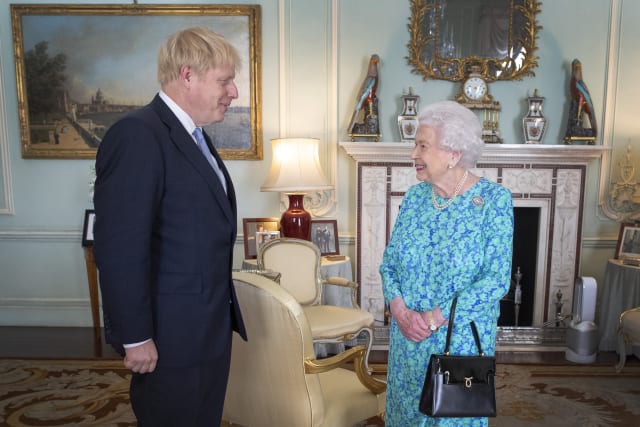 Boris Johnson has endured a more turbulent first year as Prime Minister than many of his predecessors.

Here are some of the key events:

– July 23:  Boris Johnson is elected as leader of the Conservative Party after a campaign promising to take Britain out of the EU by the deadline of October 31 “do or die”.

– August 20: Brussels rebuffs a demand by Mr Johnson for a new Brexit deal, including dropping the Irish backstop – the contingency plan to ensure there is no return of the hard border between the North and the Republic.

– August 28: The Prime Minister obtains a five-week prorogation of Parliament from the Queen, prompting furious accusations he is suspending democracy to prevent MPs frustrating his Brexit plans.

– September 4: Mr Johnson purges 21 rebel Tories – including former chancellors Ken Clarke and Philip Hammond – who combined with opposition parties to pass the so-called Benn Act requiring him to seek a Brexit delay if he cannot get Parliament to back a deal by October 19.

The Prime Minister attempts to trigger an early general election but fails because he does not win the required support of two-thirds of MPs.

– September 24: The Supreme Court rules the Prime Minister’s advice to the Queen to prorogue Parliament was unlawful because it had the effect of frustrating Parliament, paving the way for MPs to return to Westminster.

– October 17: After intense negotiations, the Prime Minister announces he has reached a deal with Brussels which means the country can leave the EU “as one United Kingdom” but his DUP allies say they cannot support it as it threatens Northern Ireland’s place in the Union.

– October 19:  Mr Johnson calls the first Saturday sitting of the Commons in 37 years in an attempt to get MPs to back his deal only to see them vote for an amendment requiring him to seek an extension to January 31 under the Benn Act. Mr Johnson dispatches a senior diplomat to deliver an unsigned letter asking for the delay.

– October 29:  Mr Johnson finally gets the general election he wants at the fourth attempt as Labour drops its opposition and the Commons passes one-page bill allowing polling to take place on December 12.

– November: The first case of a new coronavirus is identified in the city of Wuhan in the province of Hubei, China.

– December 13: After a campaign promising to “get Brexit done”, Mr Johnson secures an election victory with an 80-seat majority as Labour’s “red wall” crumbles.

– January 9: Mr Johnson gets his Brexit deal through the Commons as the European Union (Withdrawal Agreement) Bill is given a third reading with a majority of 99.

– January 28: Mr Johnson defies pressure from US President Donald Trump and Tory backbenchers to announce that the Chinese tech giant Huawei can continue to play a limited role in providing the UK’s 5G network.

– January 30: The coronavirus outbreak is declared an international public health emergency by the World Health Organisation (WHO).

-January 31: Mr Johnson celebrates in No 10 as a clock projected onto the walls of Downing Street outside counts down to Britain’s departure from the EU at the stroke of 11pm.

Earlier in the day two members of the same family test positive for coronavirus in the first cases to be diagnosed in the UK.

– February 2: The Government announces a nationwide advertising campaign urging the public to wash their hands thoroughly and use tissues to help contain the spread of the disease.

– February 10: The Government declares coronavirus a “serious and imminent threat to public health” and takes powers to forcibly quarantine people as the number of cases in the UK reaches eight.

– February 13: Sajid Javid resigns as chancellor after being told he must sack all his advisers if he wants to keep his job in Mr Johnson’s Cabinet re-shuffle.

– February 29: Eleven days after his divorce to his second wife is finalised, Mr Johnson and his partner Carrie Symonds announce they are engaged and expecting a baby.

– March 5: UK cases reach 90, as the first UK patient – a woman in her 70s – dies in the Royal Berkshire Hospital, Reading. A second person, a man in his 80s, dies the following day.

– March 8:  Mr Johnson is heckled during a visit to Bewdley in Worcestershire to meet residents hit by floods following criticism he had remained holed up in the Foreign Secretary’s Chevening estate while much of the country battled severe flooding.

– March 11: The Covid-19 outbreak is declared a pandemic by the WHO.

– March 16: Mr Johnson urges people people to avoid pubs, clubs and theatres, stop all non-essential contact and to work from home if they can after scientists at Imperial College warn 250,000 people could die unless stricter measures are adopted.

– March 20: The Prime Minister orders pubs, restaurants, cinemas and gyms to close in a “huge national effort” to defeat the disease as Chancellor Rishi Sunak announces an unprecedented furlough scheme to protect jobs.

– March 23: Mr Johnson puts the UK in lockdown with the closure of all non-essential shops and limiting when people can leave their homes, with fines for those who fail to comply.

– March 27: Mr Johnson and Mr Hancock test positive for Covid-19, while chief medical officer Chris Whitty says he has symptoms of the disease and is self-isolating. The following day confirmed UK deaths from the disease pass 1,000.

– April 2: The Prime Minister comes out of self-isolation for a brief appearance at the door of No 11 Downing Street to join the weekly mass clap for key workers.

– April 5: Mr Johnson is admitted to St Thomas’ Hospital for tests as a “precautionary step” as his coronavirus symptoms persisted.

– April 6: Mr Johnson is moved to intensive care after his condition worsened. Downing St says Foreign Secretary Dominic Raab will deputise for him as the number of people who had died in hospital after testing positive for coronavirus in the UK rises beyond 5,000.

– April 9: The Prime Minister is moved back onto the ward at St Thomas’.

– April 12: Mr Johnson is discharged from hospital to continue his recovery at Chequers, thanking NHS staff for saving his life. The hospital death toll of people who had tested positive for coronavirus in the UK passes the 10,000 mark.

– April 30: At his first press conference since being hospitalised, Mr Johnson says the country is “past the peak of this disease” and promises to deliver a “comprehensive plan” to ease lockdown.

– May 5: The UK’s declared death toll from coronavirus rises to more than 32,000, passing Italy’s total and becoming the highest in Europe.

– May 10: The Prime Minister sets out “the first sketch of a road map” for easing the coronavirus lockdown in a televised address to the nation, ending the “stay home” order and encouraging people to return to their jobs.

– May 22: Media reports that Dominic Cummings, Mr Johnson’s top adviser, travelled to his parents’ property in Durham with his wife and child at the height of the pandemic in apparent breach of lockdown rules.

– May 24: Mr Johnson says Mr Cummings “acted responsibly, legally and with integrity”, and “any parent would frankly understand what he did”.

– May 25: Mr Cummings defends his actions at an impromptu press conference in the No 10 rose garden, saying he behaved “reasonably” and does not regret his actions.

He says that he went to Durham because of childcare concerns if he became incapacitated by the virus had that a trip to a local beauty spot was to test his eyesight after recovering from the disease.

The Prime Minister says shops across England will be able to open in June if they can meet the coronavirus guidelines to protect shoppers and workers.

– June 23: In the biggest easing of lockdown regulations in England to date, the Prime Minister announces pubs, restaurants and hairdressers can re-open from July 4 as the two-metre social-distancing rule is relaxed.

His national security brief is to go to Mr Johnson’s Brexit negotiator David Frost, a political adviser, amid accusations he lacks the necessary experience and that the job is being politicised.

– July 14: In a major u-turn, Mr Johnson rules Huawei can no longer supply the UK’s 5G’s network and that existing kit must be stripped out after intelligence chiefs warn new US sanctions mean its products are no longer secure.